From Grand Junction, we drove northwest via Glenwood Springs to Aspen… Then, we drove back up the local highway to Glenwood Springs before turning east to Vail. Two days later, we drove down from the mountain passes to Denver. Up until now, I have focused the blog posts on descriptions of the places we visited. Today’s post will focus instead on our ride through Colorado. This is done for a couple reasons. First, the rides were interesting. Second, I haven’t a lot to say about the places ( with a couple exceptions) because we spent most of our time getting Mrs Bear’s leg re-evaluated in Vail and seeing old friends.  So here goes..

Leaving Grand Junction put us in that Netherland of continuing red rock changing over to the majesty of the Rocky Mountains. We snapped the above photo from the car. The top of the butte looks like layers of sandstone, while the slopes below look like sand that has eroded and fallen off the butte from the top. While it looks like loose rock, it isn’t. We junior geologists think that, over time, the loose sand and rock pressed against itself and solidified. Whatever it was, the grayish color and trails of erosion sure looked wonderful, especially with the blue sky in the background.

Up the road a ways from Grand Junction was the town of Glenwood Springs. The Colorado River accompanied us this far, before it went northeast into the central mountains, while our road would take us more due east toward Vail. Thirty years ago, I told Mrs Bear that Glenwood Springs was my idea of the perfect place to live. Back then, we were avid skiers, and Glenwood Springs was roughly 60 miles from both Aspen (South) and Vail (east). It was at a lower elevation and a larger town where I thought we could both find work. Well, twenty years ago, we were in a limbo and Mrs Bear found a medical opening in Glenwood Springs. It was “put up or shut up.” I told her to apply, but the opening had been filled already. So here we were…We finally made it to Glenwood Springs. The town looked quaint and appealing, but Mrs Bear had mentally moved on and doesn’t like to play “what if…” games. But we made an impulsive decision to drive down to Aspen for lunch anyway. We drove by three ski areas before getting to Aspen and had lunch in town, looking up at Aspen Mountain…Excuse the bad sun angle.

Lunch confirmed one rumor about Aspen… It is very expensive. Aspen has always been known as a destination that attracts the rich and famous, and evidently the prices back this up. On a positive note, it is a beautiful place, with a ski town that literally edges right up to the slopes of Aspen Mountain. We drove around some, and then I asked Mrs Bear if I could break off for a bit to visit a memorial to John Denver.

John moved to Aspen in his 30s and lived there the rest of his life. Many of his songs were written about Colorado and Aspen. When he crashed his experimental airplane, the people of Aspen dedicated a rock garden in his memory and etched lyrics to his songs on the rocks. I had always wanted to visit, as his music became popular about the time I was graduating from college. Many of his song lyrics meant, and still mean, a lot to me. 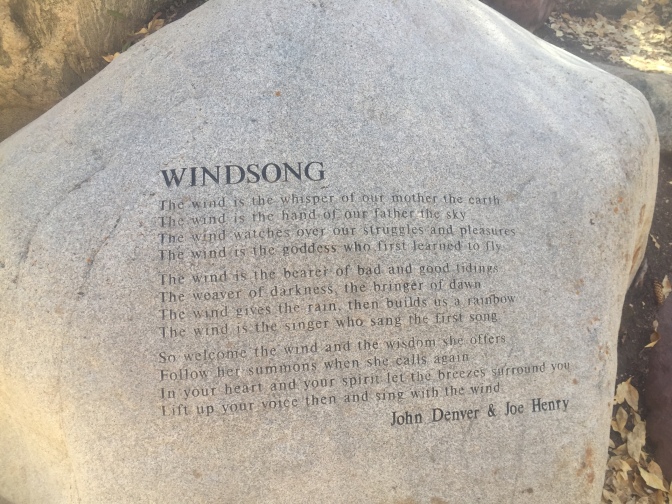 Leaving Aspen, we drove back to I-70 and Glenwood Springs before turning east to Vail.  We spent two days there, seeing an old friend And having Mrs Bear’s leg evaluated by the orthopedic clinic. There are so many leg injuries there during ski season that we figured it was the best place to have her re-evaluated. While the bone is healing, she will be non weight bearing until our return home in three weeks. But, Mrs Bear decided to shed the wheelchair and begin crutching her way to activities. This was also good for me because I don’t have to lift the wheelchair in and out of the SUV as much. 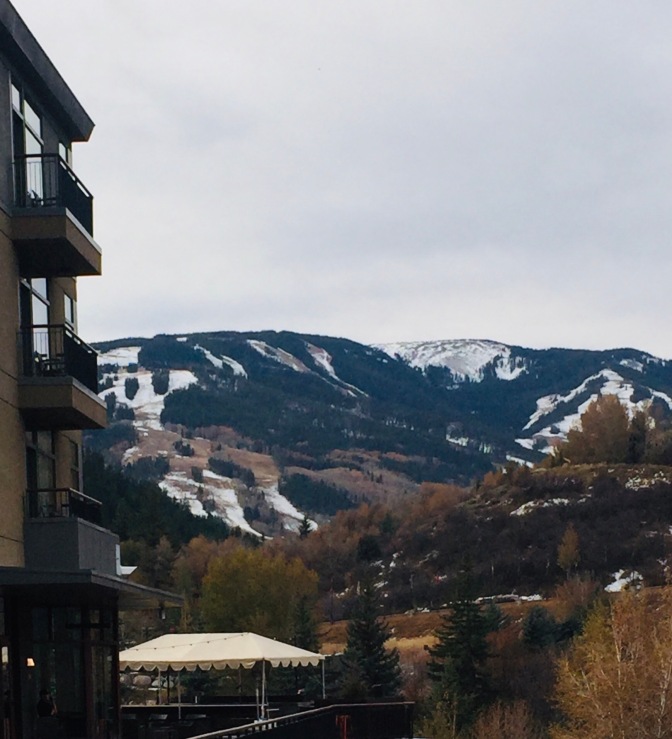 Two days later, we drive from Vail, base elevation of about 8000 feet, to Denver. This drive involves going over two high mountain passes, around 11,000 feet, before descending down to 5,400 feet in Denver. I was actually looking forward to the drive because I almost always have to do it in snowy conditions on our travels in ski season. But wouldn’t you know that an early snow came blowing in and made me drive through the passes in poor  conditions. I think it is some kind of conspiracy. The first pic above is Beaver Creek Mountain, west of Vail…It already has snow on the trails and will probably open for the season in late October.  The last pic is toward the top of the second pass at the Eisenhower Tunnel, as the snow starts to break up. From there, it’s all downhill to Denver.

The road out of Denver into Kansas will be covered in the next entry.