Arches was the last of the four National Parks we visited in Utah. This one is literally on the perimeter of Moab. You drive north out of town for about three miles, go through the entrance gate and visitor’s center, and then drive up a series of awesome switchbacks to the top of the Mesa before disappearing into an artistic creation of rock sculptures.

I have to admit that I was not really looking forward to visiting Arches. We had seen the masses of cars coming back into Moab around 1530, and the write-ups had discussed waiting lines at the entrance  of an hour or more. I was expecting Zion-like crowds, difficulty parking, and problems getting through the throngs to the featured observations. And sure enough, we hit a major backup of about 35 minutes at the entrance. But then a funny thing happened, except for the parking at the furthermost observation point, the Park just swallowed up the people and vehicles, spread them out through the scenic pull-outs, and created a much calmer and less visited aura. Mrs Bear just checked the figures… Zion gets over four million visitors per year which made it one of the top three or four parks in numbers. Bryce was over two million, while Arches had over a lowly million visitors in each of the last seven years. Canyonlands was the least visited of the four. 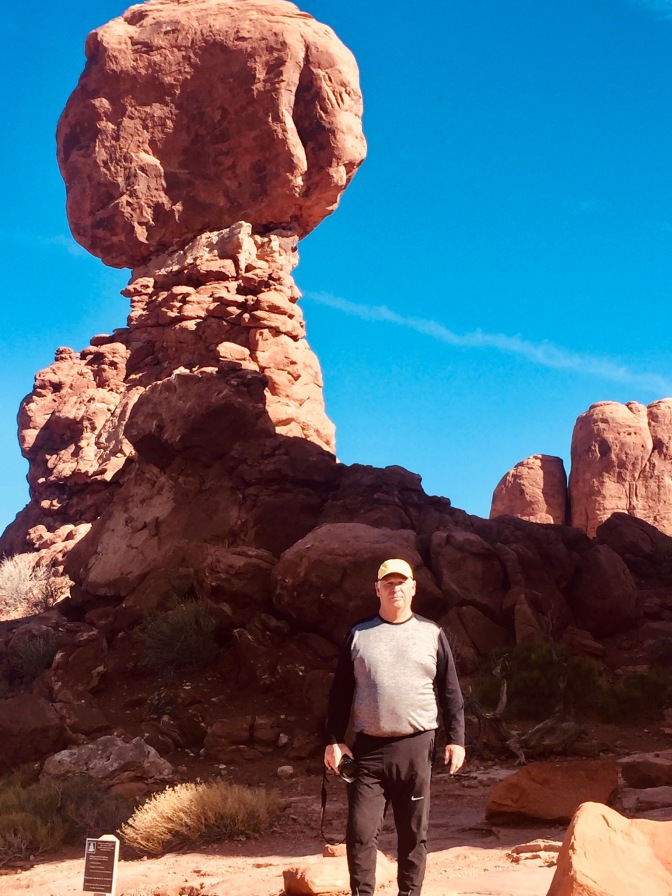 The first part of the park presented an array of incredible rock formations, slot canyons, and eroded pinnacles.  The photo of myself is with “Balancing Rock.” The park presents scenic vistas, and often short hikes to see the sights up closer. For example, there was a half-mile hike that took me completely around Balancing Rock.

As we went further into the park on the 18 mile scenic drive, we started to see the arches. There are a few visible from the road, but most required parking at a scenic viewpoint and walking to a vantage point. Before viewing, a little more about how arches were formed. The display above shows how the rock begins to have horizontal erosion cracks continue to split into “fins.”  Then the softer rock in the middle of the fin erodes out which forms the arch. The display demonstrates that not all fins become arches…Some are just lucky. But these erosion processes will eventually collapse the existing arches and perhaps develop others. If I move my reincarnation date with the Colorado River back to a few hundred thousand years, I can check out this theory. 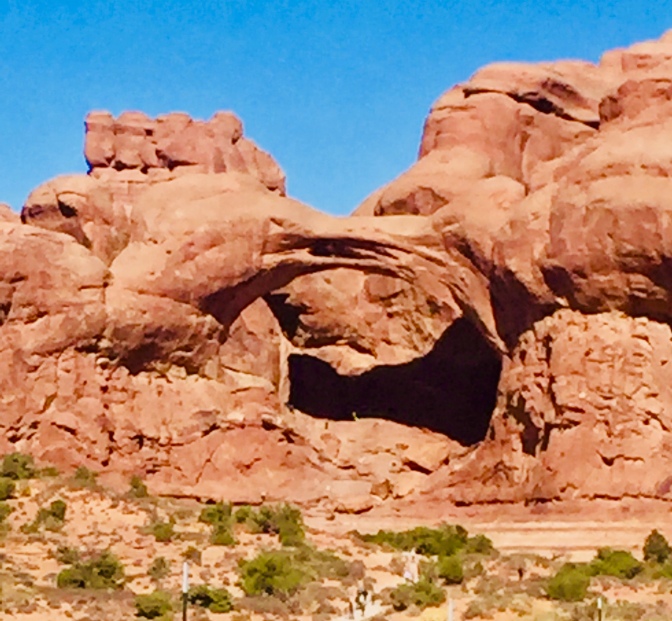 Above are photos of a couple arches. The one at the top was called “windows.” The second, over my left shoulder on the ridge, was named “delicate arch.” This viewing required a half-mile steep hike to get closer. My telephoto will yield a better pic for the Shutterfly album, but all my blog pics are from my phone.

The next was “sand dune arch.” But the neater part of this was the hike through the rocks. The path consisted of inch-deep red sand and narrow passages through the crevasses.

Our last was “tapestry arch,” near the end of the scenic road which was the first traffic mess. First, the arch, which I reached via a trail from an earlier pullout. It was probably the most impressive of the ones we saw. By the way, the Park Service actually had written notices prohibiting people from sitting or standing on the arches…Are tourists so dense that this notice was necessary??  Unfortunately, yes.

As for the traffic and parking snarl, this was due to the views of Tapestry Arch from a closer distance, and a number of trailheads to other impressive arches that can be seen only by hiking. We chose to drive back out and stop at more pullouts of the rock formations on our way out. 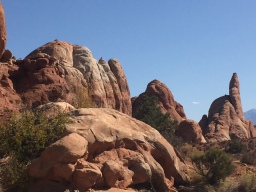 Arches was more than I thought it would be…It is a great visit, especially if you are OK with mild to moderate hiking. And bring lots of water. We were there in 55 degree weather, but the sun is still intense, and it’s easy to get dehydrated. And there are very few resources in the park. Fill up on the way in and enjoy getting out on the trails…Just don’t sit on the arches !!