I need to explain that my conversation with the Colorado River actually occurred three days after leaving Monument Valley. In between, we based out of Moab, Utah. Moab is driving distance from both Canyonlands and Arches National Parks…These will be the subjects of the next two posts.

The road to Moab continued to take us along red rock buttes, cliffs, and canyons. Usually we also were close to a river, since these grades were the best place to build roads.  The above arch was a view from the road south of Moab.

Moab itself was a very interesting place. It has red canyon walls on both sides, and the Colorado River bisects the town on its way to joining with the Green River about 30 miles downstream. Various rafting trips are offered on the river. Also, the town is a major destination for mountain bikers. They were everywhere. In fact, there were probably more lanes and paths for biking than roads for cars. I’m not a big mountain biking expert, but it is my understanding that much of the draw is riding on “slick rock.” Rather than dirt, these paths are sandstone which is a good grip for the bike tires.  A lot of the trailheads here were for mountain biking rather than hiking. The beer can above is from the Moab Brewing Company…Dead Horse Amber Ale…More on Dead Horse in a little while. On the other side of the can, it says “Five Million Years in the Making !!”

Canyonlands is the largest of the Utah National Park’s. It has a road 50 miles south, which takes travelers through mesas to vistas near the Colorado River after it joins the Green. We drove to the northern sector which is called the “ Island in the Sky.” While I understand that not all of you are golfers, imagine an island green…This is an island,  after completely surrounding it, with a little sliver of connecting ground for the golfer to actually walk out to the green. This is similar to what you will experience here. You drive out on a large Mesa which gets thinner, until it seems you are surrounded by cliffs looking down to the Green and Colorado Rivers below.  The rivers actually contribute to this image that you are on a high island, 1200 feet above. The views are spectacular as we drove around the edges of this island rim. 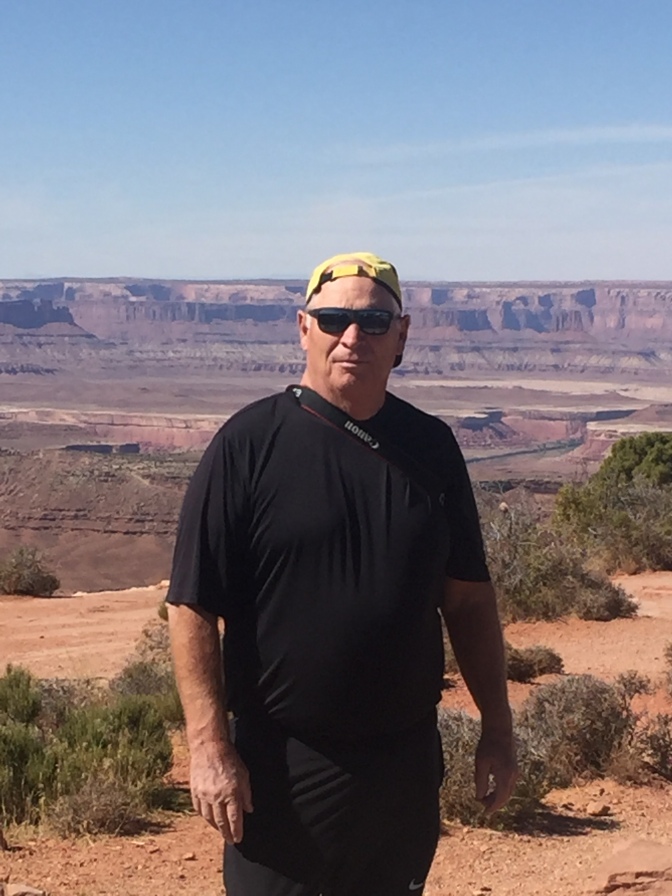 After completing our drive along the edge, we drove back out and entered a Utah State Park: Dead Horse Point, hence the name of the ale. This park was on a wider point of the Mesa. But the land narrows once again to a slender point above the Colorado River. It got its name because Of the legend that cowboys herded wild mustangs onto the point which had a neck of only 30 feet. They then fenced off the neck for use as a corral, trapping the horses. I thought the views here were even better than Canyonlands. Behold: 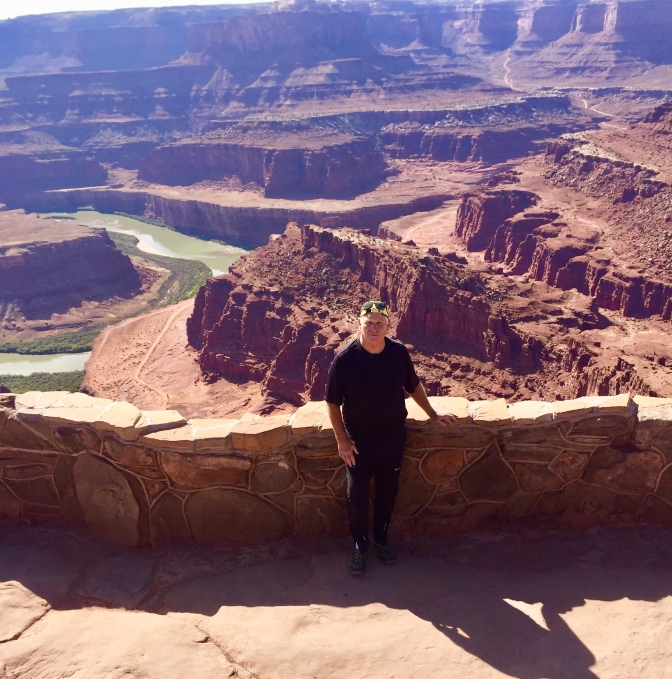 The locals recommended coming up to Dead Horse Point for the sunset, but this didn’t work into our day. But I can certainly imagine how beautiful it would be over the river vistas and cut canyons below.  By the way, I’m sure the Colorado River is also proud of its artwork below.