Zion is south,or further down the Grand Staircase of the Colorado Plateau. It is a massive canyon with a maximum height of 8,800 feet and an elevation drop of 2,600 feet from rim to base. Unlike Cathedral Breaks and Bryce, visitors enter Zion at the base and can either hike or drive up the walls toward the summits. The walls of the canyon were formed by geological upshifts and the carving of the Virgin River over the past millions of years. 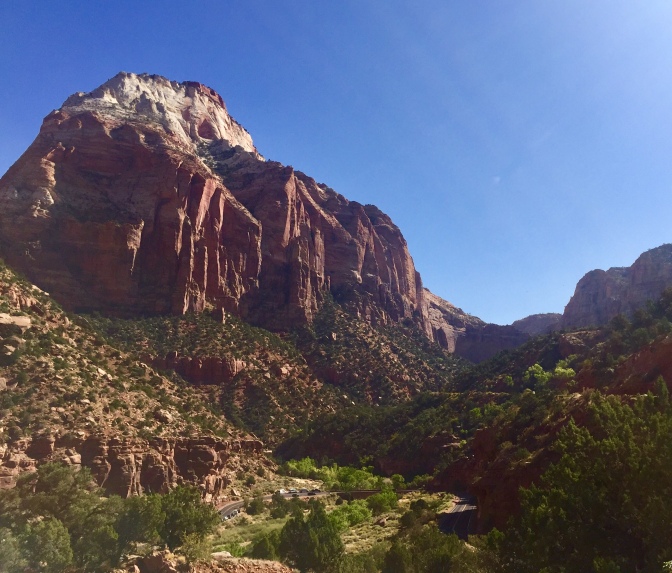 There are two main driving options when visiting Zion… There is a canyon entered by the “Scenic Byway,” that is accessible most of the year by shuttle bus only.  You can either leave your car outside the park and take the bus in, or park at the Visitor’s Center and pick up the bus there. Taking the bus lets you exit at any of a number of stops along the byway, and catch another bus later on to visit another locale or get back to your vehicle. These stops include a number of hiking trailheads and scenic vistas along the Virgin River. The canyon becomes more and more narrow further up, which is why, in addition to crowd control, the shuttle bus system was started. This option did not work for us. Given Mrs Bear’s injury, we were not certain of the bus access, so we drove in and tried to park in the lot at the visitor’s center. While able to park, the distance and construction made us decide to forego taking a bus there as well. So we missed this part of the Zion experience. 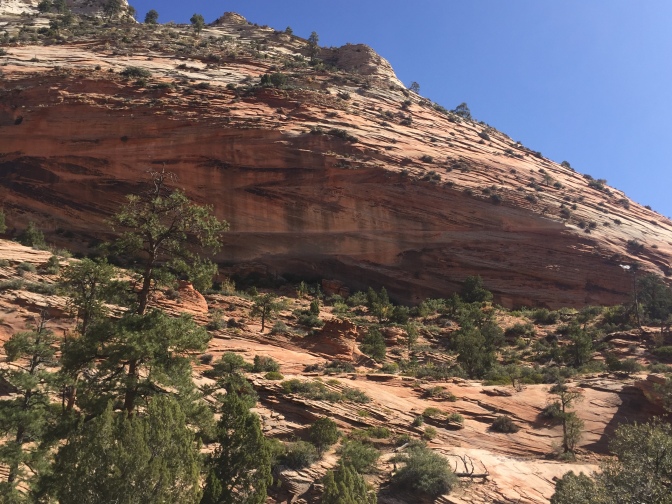 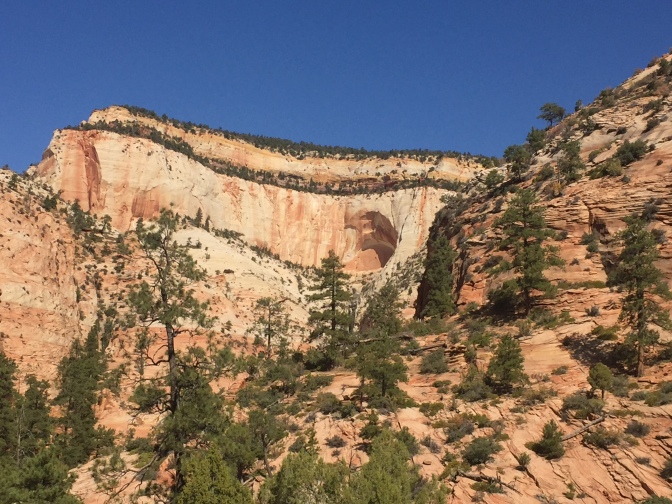 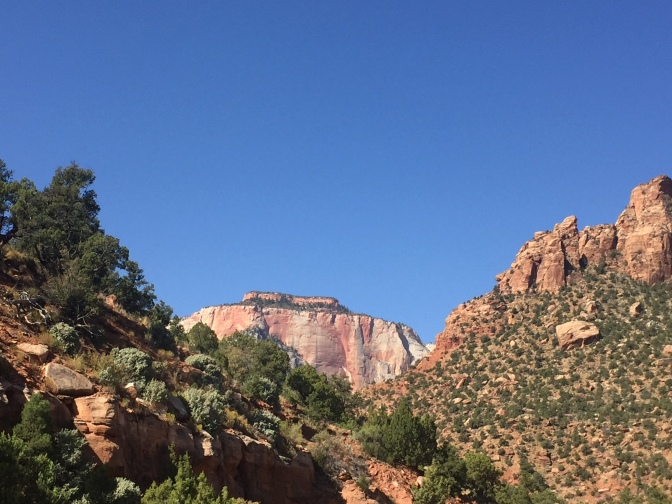 Instead, we opted to drive up to the canyon summit on the Carmel Highway. This road originally took visitors up a switchback road to the end of a box canyon. Then in the 1920s, a major undertaking drilled a tunnel through the canyon wall so the road continued  in and out of the park via an eastern  entrance. The tunnel is 1.1 miles long and has five open windows that look out on the canyon below. This road through the tunnel was built for 1920 era cars, so today’s traffic of motorhomes and SUVs requires that the tunnel be limited to one-way passages. The drive up was amazing, and while waiting in the tunnel line to drive back down, we had some visitors:

Mrs Bear came up with a brilliant idea to compensate for missing the shuttle bus canyon. There is one additional road that accesses Zion 45 miles further north, winding  up an ascent of Kolob Canyon. So we drove back to our base in St George and got up early the next morning for our drive to Kolob Canyon.  Kolob means “finger,” as we were rewarded by experiencing a beautiful slot canyon with relatively few people compared to the throngs at Zion’s main entrance. The drive is a winding five mile ascent that reaches the end of the canyon with a vista of a series of peaks on the other side. 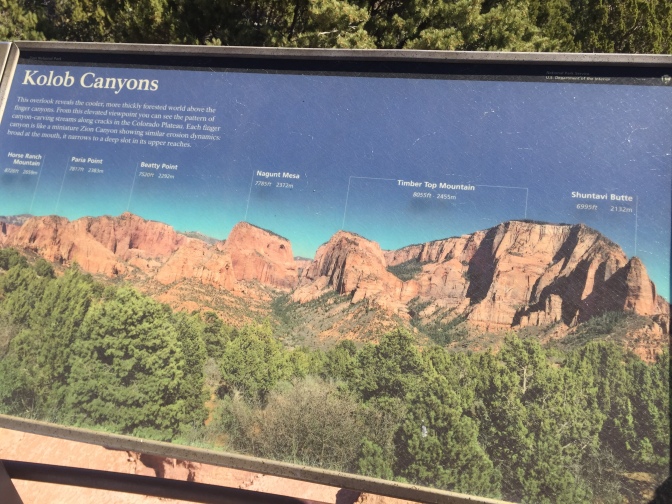 As hoped, Kolob was more intimate and less traveled. While Zion was visited this summer by 500,000 people per month, we saw about 100 people at the Kolob summit. Visiting Kolob is also a good transition as it lies between Zion Canyon to the south and Bryce to the north.

Despite the grandeur of Zion, I felt a little unfulfilled… And it wasn’t the park’s fault. Our injury predicament limited our options and ability to travel the Scenic Byway. Contributing to my regret was the reality that we were supposed to stay at the Zion Lodge, which is actually halfway up the shuttle bus road. But a phone call revealed that this old lodge did not warrant Mrs Bear’s discomfort or safety. The throng of visitors added to our malaise… Trouble parking, limited accessibility, and lines of vehicles. We thought a midweek travel day in Autumn was off-season, and it might have been. But so far, Zion has been the most crowded destination we have encountered, and the Park Service’s attempts to limit human footprints are much needed. Despite all this, there was no doubt that experiencing only a portion of what Zion had to offer was still spectacular… It was like going on a French wine tour. You can enjoy all that you sample and savor, or you can lament the vintages you somehow missed. Maybe I should perk up and plan another visit in a couple years.