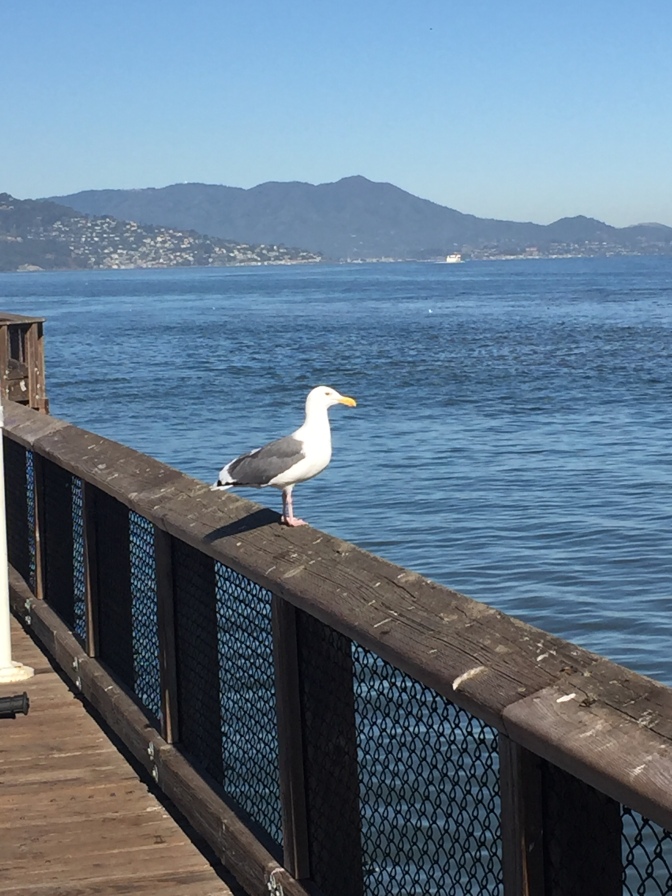 From Redding, we drove south to San Francisco. SFO is my home city…I grew up 10 miles away in Marin County.  The pic above shows my County…I lived on the flank of  Mount Tamalpais in the distance.  The town bayside to the left is Sausalito.  The gull begged to be in the photo. More on Marin on Day Two.

San Francisco was discovered by a Spanish explorer in 1769, BY LAND. The entrance to the bay is only 1.5 miles wide and often fogged over. So explorers making their way north discovered the bay. Within seven years, a series of missions, built to be a daily horse carriage distance apart, had been completed and reached this location. The initial town was named Yerba Buena, after a local herb. The town grew up around the harbor, and a street network was established as the Mexicans became independent from Spain. California was claimed for the USA during the Mexican War, and the town’s name was changed to San Francisco (Saint Francis). Growth was not great as the living conditions were challenging. Then came the Gold Rush in 1849. The population rose from 1000 to 25,000. The crews of visiting ships deserted to seek gold, so the ships were abandoned and often sunk. We learned on a visit to the National Park Visitor Center that many of these ships have been located and wait for resurrection under the foundations of pierside buildings.

On our first day, we visited Fisherman’s Wharf.

This dock area is extremely popular with tourists and very unpopular with locals. Why popular??   The bay and Alcatraz cruises leave from here. There are lots of really good seafood restaurants in the area, although I have always liked to simply go to the edge of the piers and pick up a cupful of the local crab catch and a sourdough roll. The sourdough dates back to the Gold Rush…

This is the original miner’s bread and it simply doesn’t exist outside The City…They say it’s the foggy air that gives the bread its distinctive taste. I begin to drool about 100 miles from SFO, and pass up desserts for more bread.

Other things that tourists like about Fishermans Wharf: The cable cars run from here. The best ride is to pick the car up on Knob Hill ( just below the Fairmont Hotel) and ride it down to the Wharf. Not only do you avoid the parking, but if the air is clear, you look right down on Alcatraz and the Wharf as you approach. Another line will take you into Chinatown from the Wharf.

A few more words about the Wharf. Italian names have always been prominent in SFO. Because in the 1800s, Sicilian fishermen made their way here and established very closed-knit neighborhoods near their boats. Their legacy has endured… 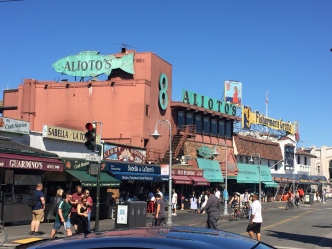 Mrs Bear and I rolled all the way out to the Hyde Street Pier where I took the photo of the gull. We watched the locals swim in the cold water of the bay, sometimes without wetsuits. The locals fish for bass and salmon, and you can hear the noise of the sea lion colonies under the piers. All—in-all, it was a wonderful day. A couple more pics from the Pier to end: 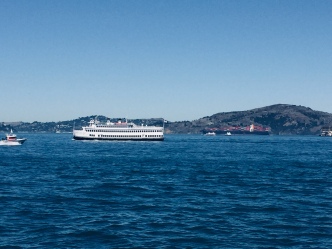 Finally, I snapped a follow-up of Mrs Bear, who is a reluctant model since the accident. But, as you are reading, we are adapting and having fun as we progress toward her next eval in Vail, Colorado. 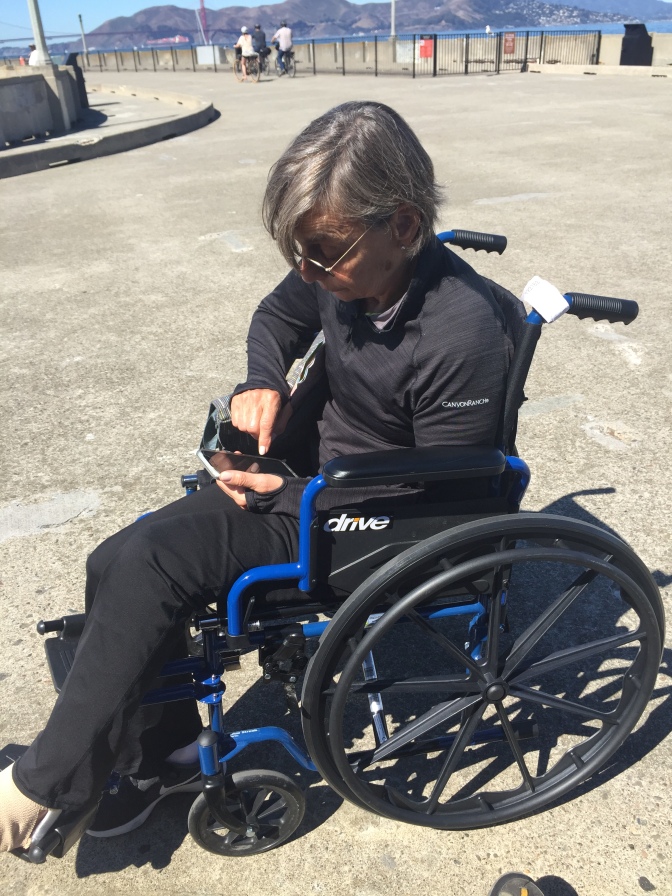