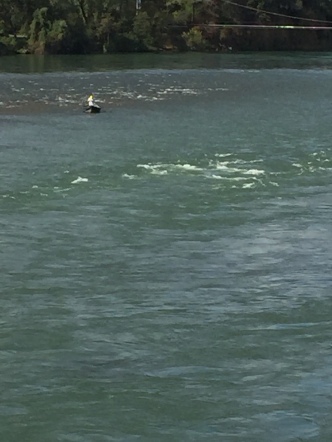 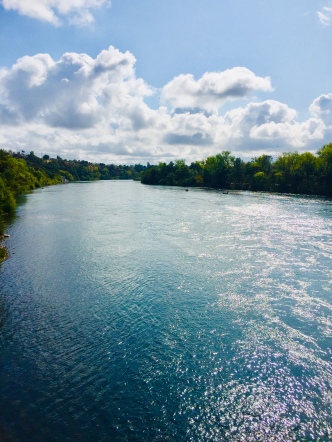 Our next stop was a drive south down Interstate 5 to Redding. On first glance, people would probably think, “Why Redding??” Or “What is Redding??” Or “Isn’t Redding in Pennsylvania??”   Well, you’d be right to ask. We got to know Redding initially because my father decided to move there after retirement. We also have other family that live in the area. So let me tell you a little about it:

Redding is about 100 miles  south of  the Oregon/California border in the central part of the state. If one drives south from the border, he/she will traverse Mount Shasta, the second highest volcano in the Cascade Range at over 13,000 feet.  I would have included a photo, except the summit was clouded over. Eventually the driver and snowmelt on the mountain, descend the flank and enter California’s Central Valley, the most fertile farmland in the world. You want a vegetable or fruit, somewhere it’s grown in the valley. Back to Redding… the town sits at the beginning of the valley and is bisected by the Sacramento River, which has its headwaters on Mount Shasta and flows another 160 miles to San Francisco Bay. The water of the Sacramento irrigates the fields of the northern half of the Central Valley. The pics above are the River from downtown Redding.

Redding had its beginnings in the 1860s when a railroad terminal was built to bring supplies to miners from the gold rush. The town lingered after the gold played out, and then had a major population increase when a project to dam the river began.

Shasta Dam was built from 1937 to 1945, and created the lake you see on the right side of the picture above. Shasta is 600 feet high, which makes it the seventh highest dam in the country. It creates hydroelectric power and controls the flow of water for irrigation and recreational uses. 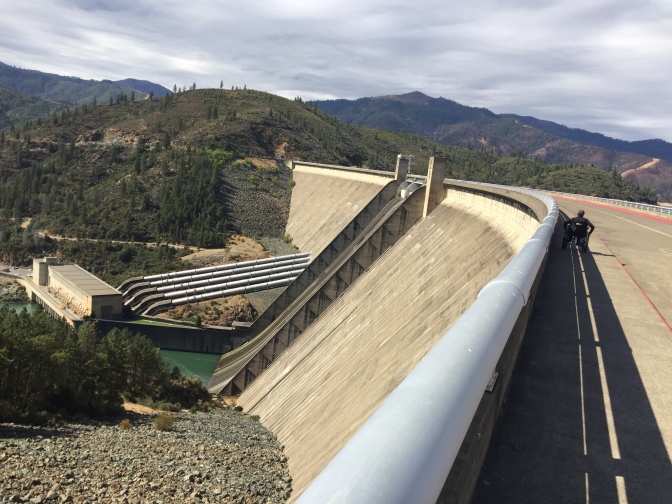 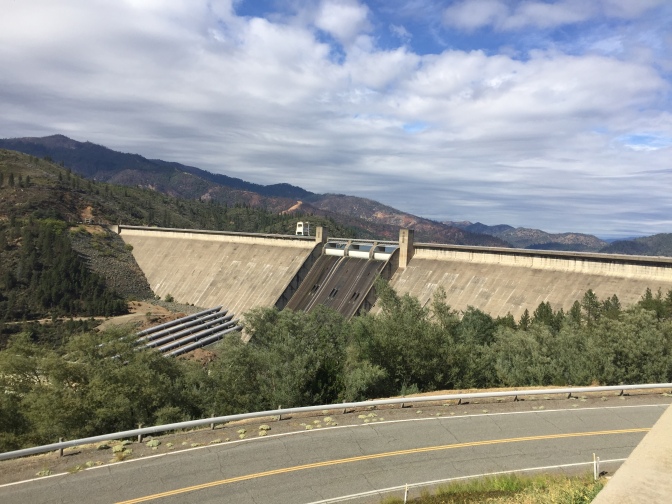 I took Mrs Bear out to Shasta Dam on our drive into Redding. It was a near perfect weather day in the valley, and we rolled across the dam to look downriver as well as back at the lake.

The next morning, Mrs Bear and I visited the Sundial Bridge, completed in 2004 and designed by Santiago Calatrava, a world renowned architect and engineer. My Redding family told us that their local foundation gave Santiago $24 million for the project and the picture below is what they got…Yes, it is an actual working sundial!!

When there, I never really thought much about the sundial function. Instead, I marveled at the span design, the unusual flooring material, and the views of the river ( pics above). The bridge is part of a nature park that includes a museum and hiking trails on both sides of the river.

So Redding has a big mountain to the north and a river runs through it. But that’s not all. To the east about 55 miles is Mount Lassen National Park

Lassen is a dormant volcano. It last erupted in 1911 and continues to have geothermal activity at its base. Like Shasta, rain in Redding is usually snow on Lassen. In California, meteorologists tell you the elevation when rain turns into snow. Lassen is over 8000 feet high and usually has snow around the summit. We couldn’t tell on our visit, other than the Ranger telling us that is was snowing on the high road.  So we drove in and turned around without getting too high. On the way down, we got our clearest glimpse and I quickly snapped the photo above. A nice man with a tripod rig was setting up n the same place…I mentioned that Lassen was trying to clear. He said calmly, “ All you have to do is wait for it !” Ansel Adams could afford to wait, but I have a wife whose leg gets achey in the car, and I had a golf game waiting for me back in Redding. So I took a pic of the way Lassen usually appears from the photo at the Visitors Center.

So, mountains to the north and east, and a river runs through it…Enough for any town, right ?? Well, not for Redding !! Go back up and look at the relief map again. On the west, you’ll notice Whiskeytown Lake and a group of mountains from the California Coastal Range. . Collectively they are known as the Trinity River Alps, because they remind many local folks of the Swiss Alps. My daughter, Malia, loves The artsy town of Weaverville, which lies halfway through the Alps on the driver’s way to the Pacific Coast.

The photo above shows a portion of the Alps from Redding. Our family told us that it might not be noticeable now, but these mountains were on fire last Autumn. The Carr fire burnt the mountains and actually jumped the Sacramento River into Redding itself.  Pretty scary for the locals. 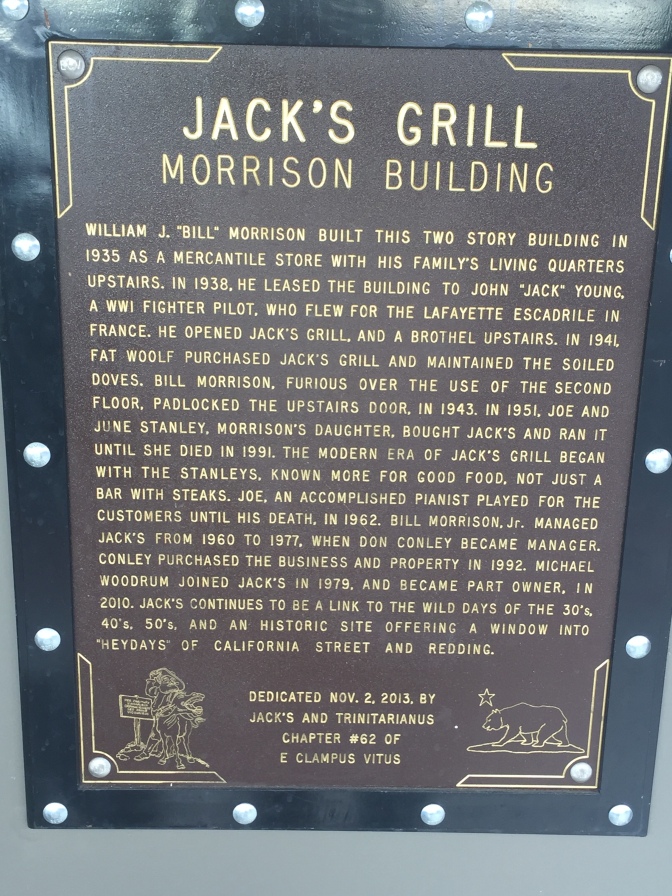 Speaking of locals, one of my favorite eateries in the country is in Redding: Jack’s Grill. Since 1938, this downtown building has been serving steaks to the folks of Redding. While the whore house upstairs hasn’t lasted, you still feel like going back into the past at Jack’s. There are no reservations… You arrive and see that the 20 or so tables are full in the dim light. You take your place, usually three people away from the bar. Slowly you move towards the front while catching up on your own and everyone else’s conversation. Finally, usually 2 or 3 beers in, you get a table, and sit down to huge steaks and baked potatoes. I’ve never even asked about dessert. Eating at Jack’s means you are from here for at least one night. Down home, friendly, and simple…That’s Redding… Nothing else really matters.