Let’s go back 48 years. I’m driving home from Montreal to California with no real plan once I get there. So I take my time and visit Banff, Glacier, Jasper, Sun Valley,  Grand Coulee Dam, and finally Crater Lake. It’s August and hot. I walk down the one switchback path to the boat dock and can’t believe how clear the water is. Objects that appear nine feet below the surface are really 30 or so. I had a wonderful day before heading to my home state of California.

Now it’s 2019 and I am so looking forward to finally revisiting Crater Lake with Mrs Bear. But the September forecast says snow. We get there early to avoid a slippery drive, but the ranger at the road gate tells us it’s snowing on the west rim. We reach the lake and I walk up to snap a couple pics before driving to the lodge.

The results of this preliminary stop are above. I get back to the car as the fog and mist roll into the crater and make the lake disappear. On some turns, , the road almost disappears as well, which is not good especially when driving the outer lane without guardrails…It was one of the few times Mrs Bear complimented my driving.

Crater Lake was formed by the eruptions of an active volcano, Mount Mazama roughly 7,700 years ago. Intense eruptions opened new lava flows to the point where the added weight caused the entire cone to collapse. Subsequent eruptions produced more lava that sealed the volcanic floor, and water from rain and snow began to fill the depression. Today, Crater Lake, at its deepest point is 1,950 feet. That makes it the deepest lake in North America, and seventh deepest in the world. Evaporation is matched  by accumulating precipitation, as the lake has no river sources. This has also led to a nitrogen depletion and deeply clear, blue water. Two species of trout were introduced to the lake during the last century and have adapted to this unique environment. The island you see in the pics is a secondary cone…There is another under the water surface. Scientists believe the the volcanic activity under the lake is dormant, but future eruptions are possible and could affect the eco structure in unpredictable ways.

As for us, we stayed inside almost all day, as the snow never let up and the lake remained hidden under a grey blanket. I took some pics of trees at the rim that may have not been noticed if the Grand Dame had presented herself

I awoke at 0500 the next morning to find that the snow had stopped. I waited anxiously until daybreak, but became depressed when the early light revealed no change…The lake was still enveloped in fog. Mrs Bear woke up and we began to accept the reality that we might not see the lake again. The forecast called for more rain and snow showers throughout the next 36 hours. We decided to pack up and leave early, rather than risk getting stuck on icy roads. But suddenly, the fog cleared somewhat and the Lake showed a glimpse of her brilliance. I put on my goretex to brave the 27 degrees Fahrenheit with 15 mph winds and rushed outside. The results were the pictures below: 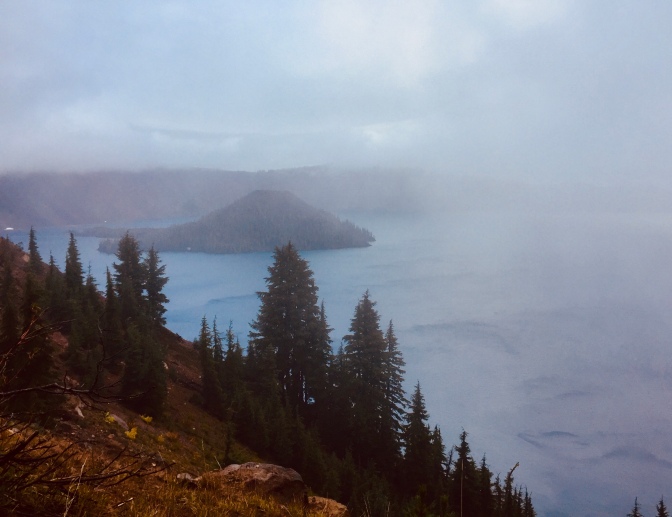 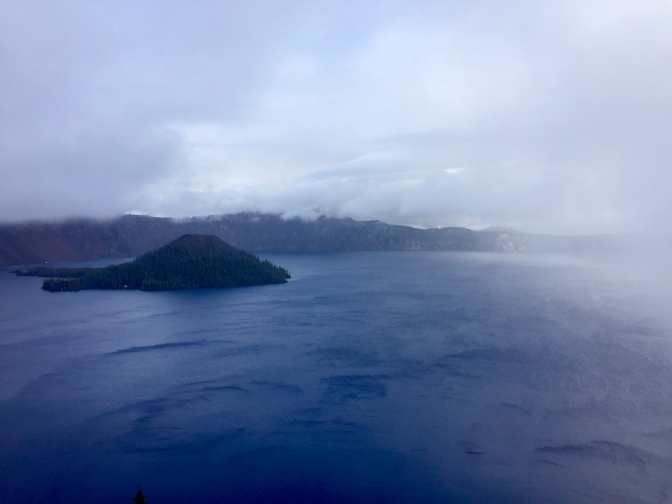 Just as quickly as it appeared, the lake disappeared once more. Some could think of it as a cruel tease, but we were ecstatic for the opportunity to witness the splendor. We left with a full belly of good luck and fortune, headed for a California homecoming.