After leaving Appomattox, we drove through the horse farms and vineyards of Central Virginia to the endpoint of our trip, Charlottesville. We chose  Charlottesville because it was the home of three United States Presidents, Thomas Jefferson, James  Madison, and James Monroe… Numbers three, four, and five.

The weather on the afternoon of the drive into Charlottesville was nice, so we decided to visit the home of President James Monroe on the way in. Monroe was the first U.S. President who wasn’t really a founding father. While being friends with Jefferson and Madison, Monroe was younger. He enlisted in the Continental Army and was promoted through the ranks to Captain. He entered public service, holding various positions in Virginia before joining both Jefferson’s and Madison’s cabinets. Monroe was the only man to jointly hold the positions of Secretary of State and War at the same time. He finalized the purchase of the Louisiana Territories for Jefferson, and, as President, presided over doctrines that basically told the powers of a Europe to stay out of North America, as well as making compromises that headed off the Civil War for a few more decades. 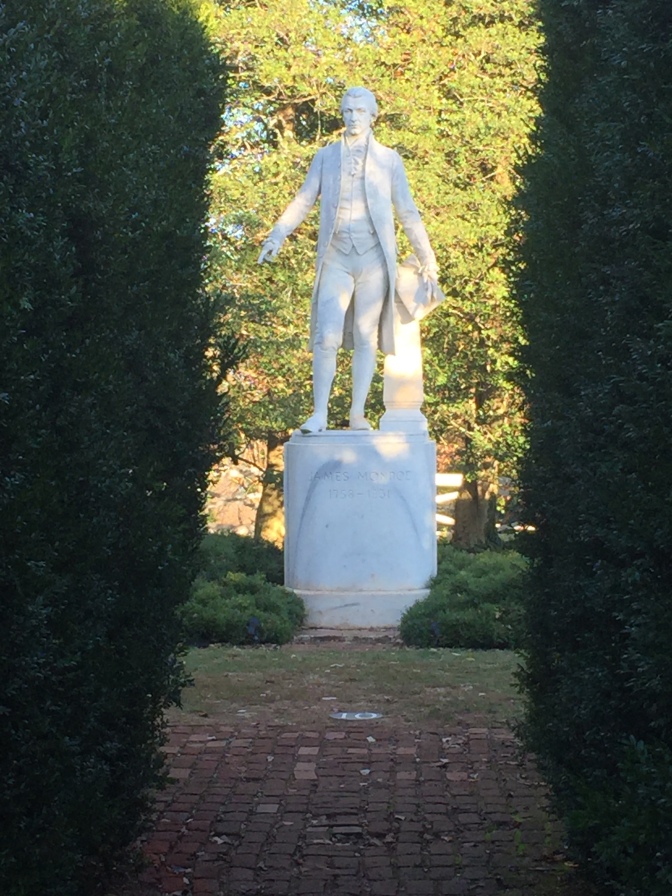 In 1793, Monroe purchased 1000 acres directly adjacent to Jefferson’s Monticello Estate. His family lived there for the next thirty years. He built a home and farmed the land with the help of thirty or more slaves. Sadly, Monroe fell into serious debt while President and was forced to sell the estate. It was owned by a series of people, the last of whom willed the property to Monroe’s alma mater, William and Mary University. 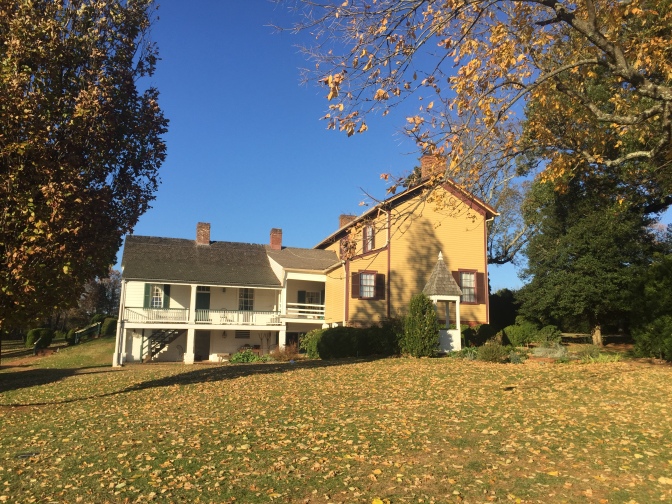 The property has a nice home, seen here from the side. The brownish section as added on by a later owner to a wing that was believed to be Monroe’s residence. There’s actually very little known about Monroe’s property because he kept almost no records. The best guess is provided by fire insurance policies that described the size and materials of the home. As it turns out… 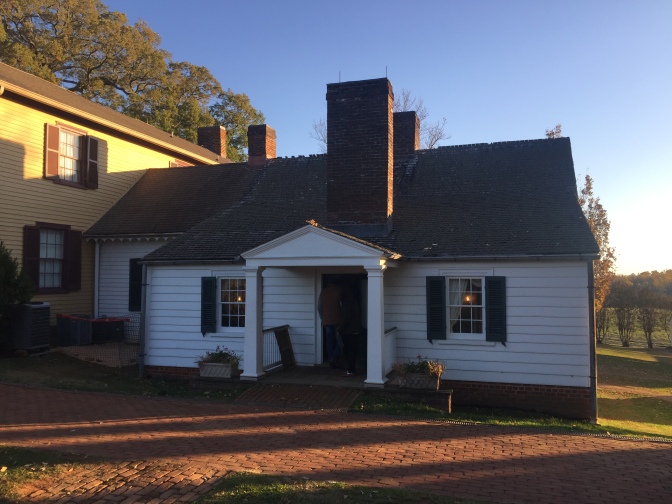 the consensus is that this smaller addition (white), as seen from the opposing direction, was actually built by Monroe as a guest quarter. Archeological digs have discovered that the original house’s boundary lies under the living room of the brownish home added later, and stretches forward into the yard. The Foundation has a plan to raise and move the more contemporary house in order to learn more about Monroe’s heritage. The bottom line of this discussion is that the prominent feature is the mystery of where Monroe’s house was actually located, and what happened to it. They will need some fat-cat donors to find out. 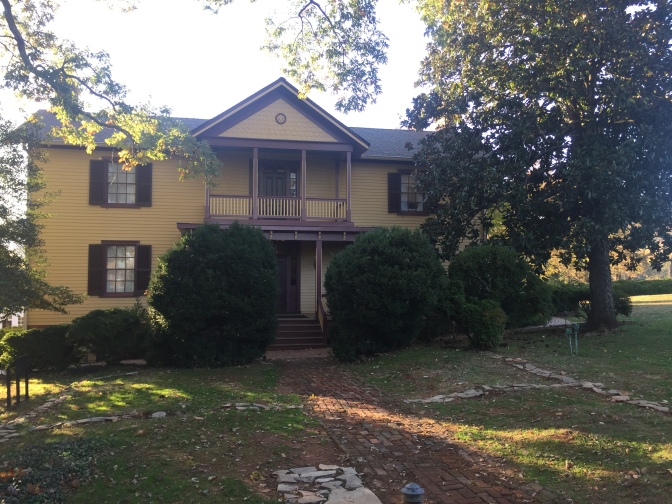 After staying in the Jefferson Room of the Monticello Inn, we visited the home of James Madison the next morning. We decided to forego the visit to Monticello… We had visited before, and decided to come back with our extended family to do the “ Behind the Scenes Tour,” in the future. I was content to spend time with Tom’s bobblehead.

As a sidebar, one of the nice features about living in Central Pennsylvania is its relative location to five urban centers within a four hour drive. Charlottesville is about five hours away… Close enough for a long weekend visit.

Our final visit was to Montpelier, the Madison plantation. The grant of over 2,000 acres was awarded to his grandfather, and although the plantation was sold to a number of owners after President Madison’s death, the land was never subdivided. The final owner, the DuPont family, willed the property to become a National Heritage Trust.

James was the eldest of 14 siblings born at Montpellier. He was recognized early on as having a superior intellect, and his family sent him to private schools and college at what is now Princeton University. He was short of stature and often in poor health… So when the conflicts of the 1770s occurred, he became involved at both state and federal levels of political activism. 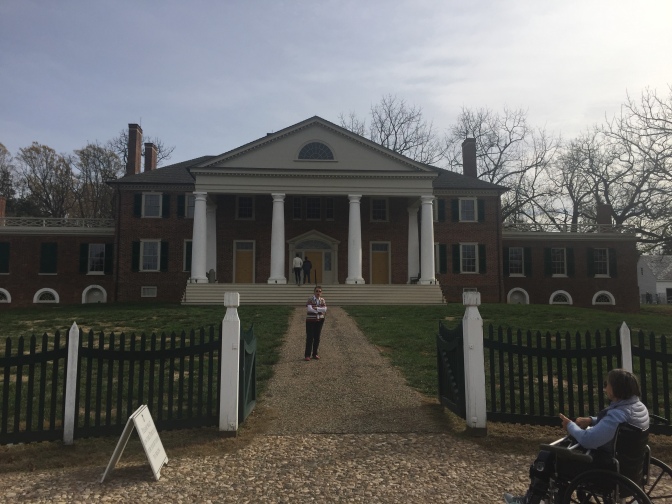 We opted to take the “ Constitution Tour,” rather than the regular home tour. We saw the same rooms, but instead of focusing on the people and belongings, our tour told the story of James Madison’s role in the writing of our Constitution and the Bill of Rights. I believe that this was one of the best tours I’ve ever attended. Not only did I learn a lot about a President who was much more than a Jeffersonian Yes Man, but I‘ll need to come back a couple more times because the story was so complex that I internalized a quarter of it. Here’s a little of what I do remember: Madison was not happy with the weakness of the federal government after the formation of the Articles of the Confederation. He believed that the government needed to protect individual’s rights, but it also had to have provisions to protect individuals from their own government. In order to prepare for the Constitutional meetings, Madison wanted to read up on every form of government ever established. He had Jefferson send him crates of books on the world’s governments while Thomas was our Ambassador to France. It helped that Madison was fluent in seven languages. Madison argued for a larger, not smaller, federal government. Our guide gave the example of a bombastic bully being able to dominate four other people… But that same bully can’t dominate 100 people who all speak out.

A few words about the personal Madison. He was not a looker. So when he became attracted to a young widow, he was too shy to introduce himself. Aaron Burr, who had no such problems, knew Madison from their shared college, and took care of the intro. Martha Washington then counseled Dolly to take another look. “ He may not look like much, but James has a lot going on intellectually.” Dolly and James married. She went on to be James’ confidante throughout his years in office.

We thought that Charlottesville and its Presidential estates would be a great finale to our three month tour. We weren’t disappointed by any aspect of our journey. We adapted to Mrs Bear’s injury, and made the trip into something different but equally special. I’ll probably have a final thought post in a couple days, but I’ll end this one by thanking you for following our American Adventure.