We had completed our visits to both Zion and Bryce Canyons, and drove down the length of the Grand Staircase to the North  Rim of the Grand Canyon. On the way, we stopped at a scenic pullover that provided a vista of almost the entire Staircase, looking back north toward the high elevation end.

The pics above are hard to make out without looking at the exhibits. Cedar Breaks is the elevation on the left, while Bryce is on the extreme right. You can also make out how the elevations are higher from the horizon to our vantage point. 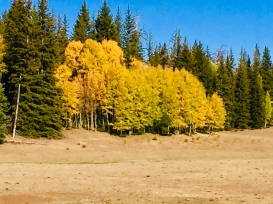 We then drove across a flatter plateau that, once again, showed off the Southwest’s Autumn. It doesn’t last long, sometimes as little as two days. In fact, the colors were past prime on the drive out one day later.

But the more remarkable thing, to me, was the image of these grasslands portraying themselves as rivers, with the forests and elevations on either side resembling riverbanks. To me, this fit in very well with the concept of the Grand Staircase…The river headwaters from the base elevations of Bryce and Zion, flowing south until they plummet over the edge of the Grand Canyon. In all the above pics, you are looking north and can make out the slight elevation gains.  I loved these images…Rivers of grasslands.

A few more geological points…Most everyone knows that the depth of the Canyon was caused by the flow of the Colorado River cutting into the various layers of rock over millions of years. But if that was the only factor, the Canyon would be deep, but very narrow. The width of the Canyon is not a Colorado River phenomenon…. Rather it was caused by the erosion at the rim by wind, and ice cracking. Stone let go and fell into the canyon floor. Again, this millions-year process caused the excessive width that we all gawk at today. Today a hawk can fly from the South to North rim in a minute or so. But if I wanted to drive from the North to South Rim, it would be 200 miles of road and about four hours in time.

Mrs Bear has long wished to visit the North Rim. We have been to the South Rim a couple times, but the crowds there can make Zion seem intimate. So when she heard there was a Park Lodge right on the North Rim, we reserved a cabin for a couple nights…These reservations have to be made exactly when the window opens… Wait a couple weeks and you probably won’t get what you want. While we canceled the reservations at the Zion and Bryce Lodges, we shortened our Canyon reservation from two to one night. Mrs Bear had to manage steps into the cabin and tight fits into the bathroom, but the views of the canyon a couple hundred yards away were worth it. 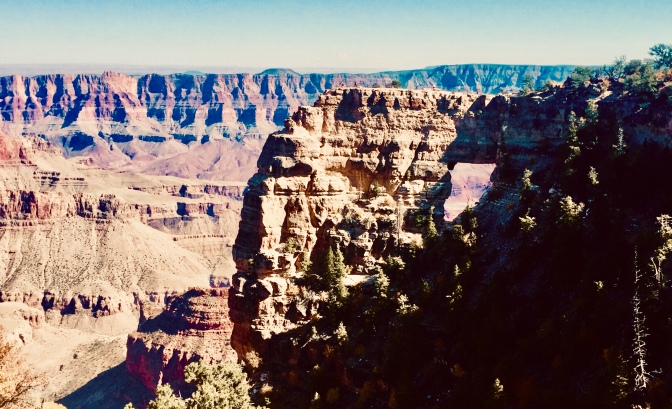 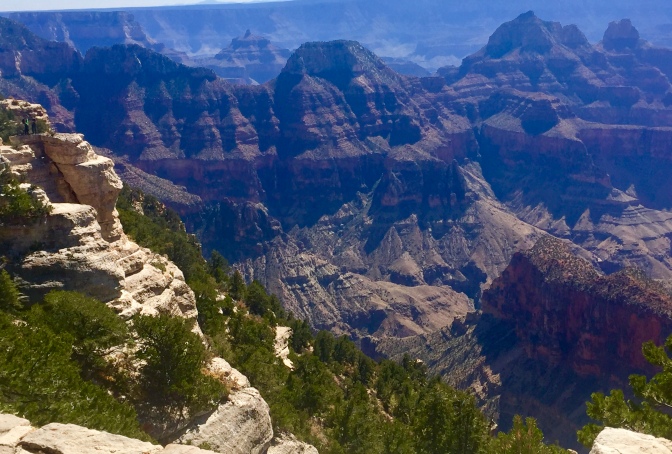 We drove along the rim roads and turned up to view the canyon from the highest elevation on the North Rim: 8,800 feet. The scenic lookouts were very friendly as many had paved pathways that gave Mrs Bear the opportunity to get out of the car and roll along the rim. There were also regular spots where paths and safety fences were built on points where you could look out for three directions.. The middle pic above shows Angel’s Window… We walked the path over the angelic opening to the viewpoint at the rim edge. 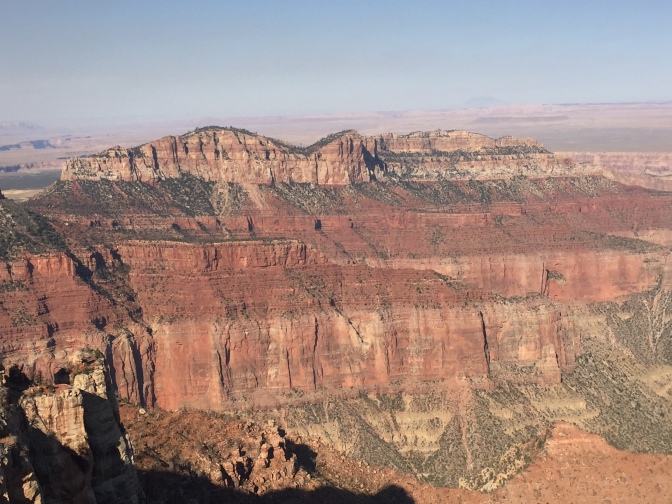 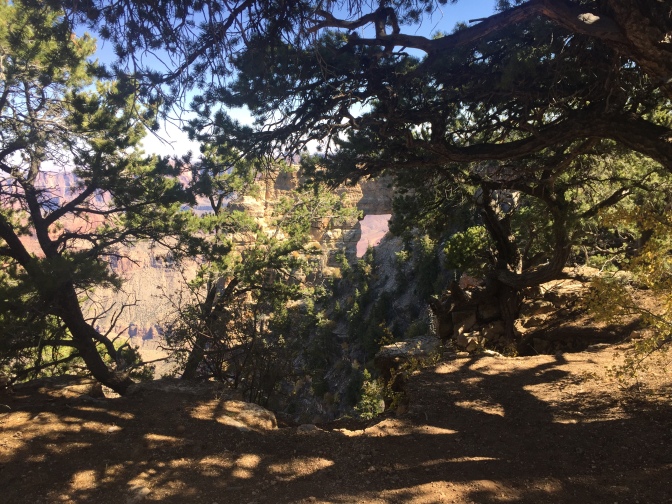 A few extra perks… The Lodge lobby and restaurant were right on the rim. You could go out to their back ledge, sit in one of their comfortable lounge chairs, put your feet up on the ledge, and watch the sun set over the canyon. Then go back inside for dinner, followed by another trip outside to watch the star show. We had a moonrise, so there were only a thousand or so stars. Such poor timing!!

Too soon, we had to say goodbye and drive through the grassland rivers again on the way out of the park. After visiting here, I doubt we will ever want to visit with the throngs on the South Rim ever again.