Our next stop was about 120 miles down the coast to Monterey Bay. Today this area is probably best known for its incredible sea-side golf courses, warmer than San Francisco weather, affluent communities, and the beginning of the Big Sur Coastline. But in the 1600s, the Spanish explorers were initially attracted to Monterey for its deep water port in the bay. Monterey became the second oldest city in California in 1769,  and was the capital of Alta California under the Spanish, and later under the Mexicans.

Speaking of Big Sur, Mrs Bear and I were scheduled to spend a couple nights at a secluded lodge 50 miles further south, but had to change our plans due to their poor wheelchair accessibility. So we settled for an Inn in Carmel. 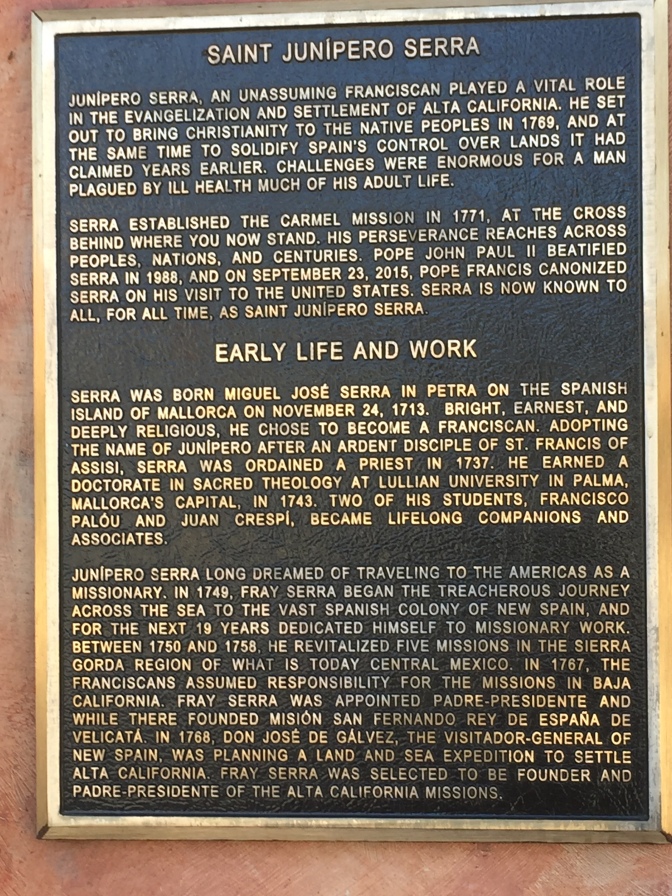 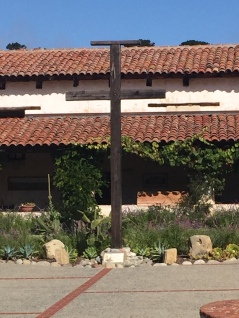 While  Monterey is much more touristy, Carmel is sleepy. Our primary activity was a stop at the Carmel Mission Basilica. Father Junípero Serra, a Franciscan missionary, established 10 missions on the California Coast between 1769 and 1780. The first was San Diego… The second was Monterey, but tension with the Spanish military commander led Serra to move his mission ten miles south to Carmel. Studying about these missions was one of the first things I learned about California History in the fifth grade. Serra’s later missions were the earliest Spanish settlements in many of today’s major California cities: San Diego, Sonoma, San Francisco, San Jose, and others. He converted the Indians toChristianity and irrigated the surrounding lands for self sufficiency. 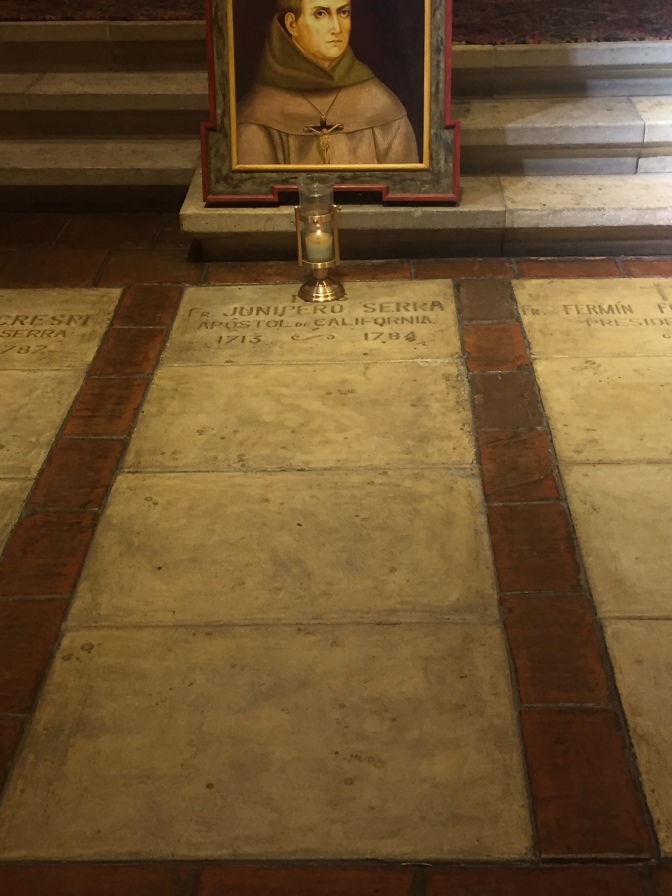 When  Father Serra died, he was buried at the alter of the Carmel Mission. More recently, the Mission Foundation commissioned an artist to mold a mausoleum. When it neared completion, it was suddenly realized that it would not fit through the entrance of the chapel. The artist did not want to scale back the tomb, so the finished work was placed in a side room set aside as  a museum.

One more interesting feature was the graveyard outside the chapel. The priests were buried with the typical identification and dates on a monument. Across the path were many graves of neophytes ( Native Indian converts to Christianity). These graves were marked by abalone shells to identify them as Indians. 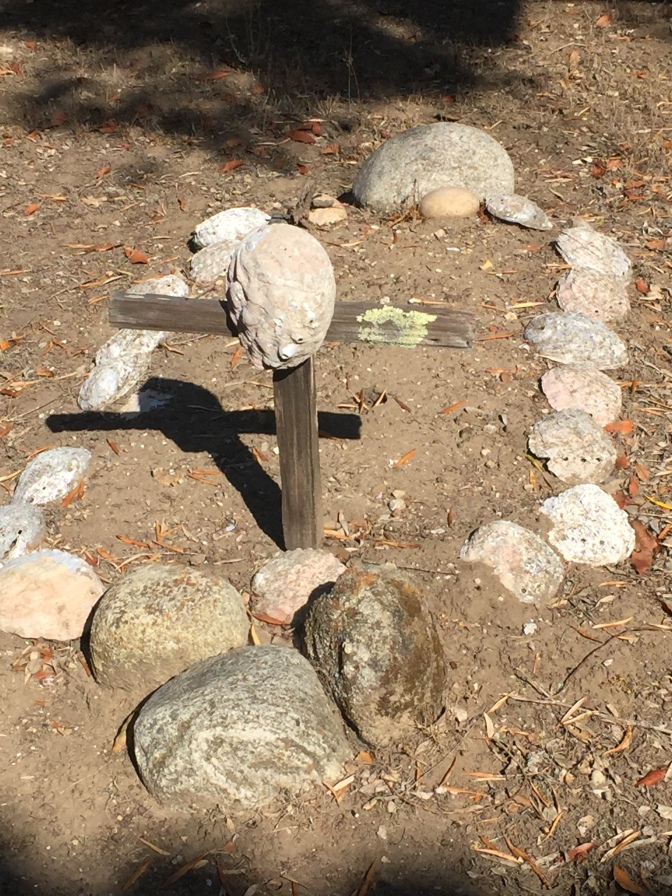 Our next stop was Monterey. 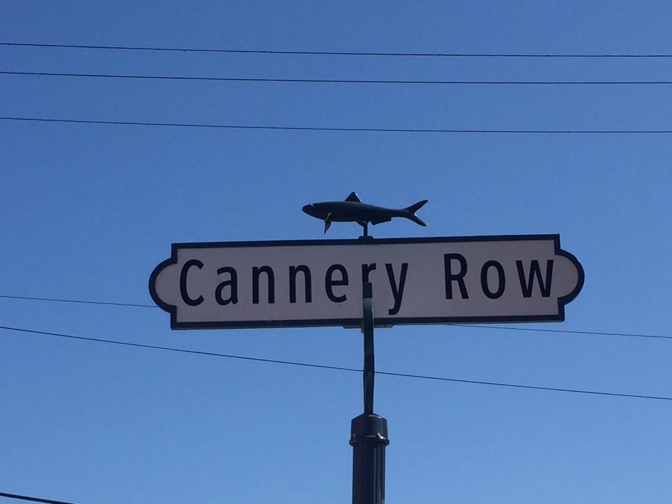 Once again, Monterey was extremely important in early California history. It’s harbor was also essential for trade, transport, and fishing. In fact, the fishing boats tied up near “ Cannery Row,” an area popularized by the novels of John Steinbeck.  Today, the fish processing plants have been renovated into shopping malls, but the Aquarium and restaurants selling local seafood and produce from the nearby artichoke and lettuce fields kindle the legacy and Steinbeck lore of this seaport town.

Mrs Bear and I toured the Aquarium. The exhibits were informative and colorful. The tank water is refiltered nightly from the sea, rather than being closed systems…Which allows some smaller sea animals  to become residents. There were also a series of outside decks that allow visitors to scan for whales, sea otters, and sea lions.

The Aquarium was stimulating, but full of school kids, so we left and strolled Cannery Row. We found statues dedicated to John Steinbeck

Mrs Bear and I always make it to the Chocolate Factory at Ghirardelli Square when visiting San Francisco. This year, with our limited mobility, we didn’t. But as we started to leave, we each noticed a store that captured our full attention. For me, it was the Pebble Beach golf outlet. For Mrs Bear, it was Monterey’s Ghirardelli Chocolate and Ice Cream shop. We had monster hot fudge sundaes for lunch, and a tradition was maintained.

This concluded our visit,  but I wanted to share one observation about our drive into Carmel. We drove past many irrigated farms outside the seaside peninsula, mostly artichokes. It was a very hot day away from the ocean, about 95 Fahrenheit… And there were crowds of people working in the fields… No shade other than their hats…Both men and women. Many of these fields had a Mexican flags waving on the sheds. I have no idea if these workers were citizens or immigrants…here legally or illegally.  But the notion that their presence was somehow taking jobs and resources away from local citizens is a crock !! These workers labor in an industry that almost no one would want to do and do us a tremendous service. I just don’t think they receive their due from most of the people who have their vegetables on their dinner tables.