A few days earlier, while reviewing our route, Mrs Bear asked why we were going to Astoria, Oregon. I don’t think she knew anything about it, and neither did I before planning this route. I told her that Astoria is at the mouth of the Columbia River, and had been the end point for Lewis and Clark. I hadn’t known that Astoria was the oldest American city west of the Rocky Mountains, or that it was named after John Jacob Astor, whose American Fur Company played a major role in the USA’s claim on the Oregon Territories, and I didn’t know that the area was largely populated by immigrant nationals from Finland, Norway, and China, who were drawn here by the fishing industry. Finally, I didn’t know that the “Columbia Bar,” where the river meets the Pacific Ocean, has a rich history of shipwrecks and Coast Guard rescues.

The picture above is the bridge linking Washington on the north side of the river, with Oregon on the south side. It replaced the ferry system in the 1960s and is 4.1 miles long. Surprisingly to me, the bridge has no toll… Any Eastern bridge of a quarter mile or so would cost at least a couple dollars. 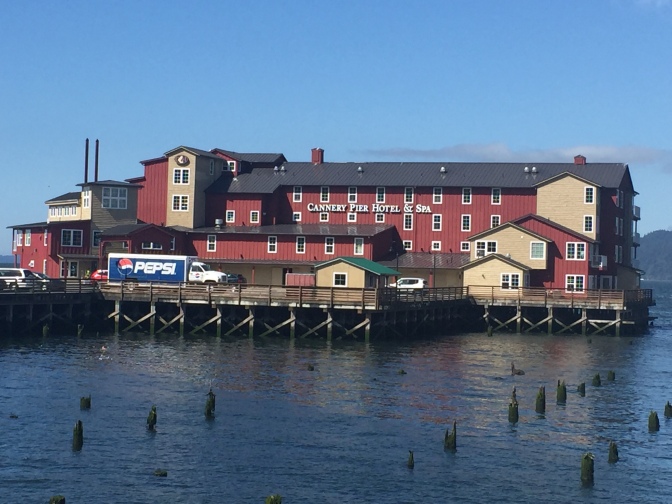 We had to find a replacement for the non-accessible B&B originally booked, and Mrs Bear found this fantastic boutique hotel almost under the bridge on pier stilts.

Not only did they have a wine tasting every afternoon, they also provided limo service to and from the local eateries.While it wasn’t the The Peninsula Hotel’s Rolls Royce, a vintage Chevrolet Impala wasn’t too shabby.  Mrs Bear looks right at home !!

Out main activity in Astoria was to have Mrs Bear’s leg re-evaluated by the local orthopedic medical clinic, who went out of their way to accommodate us. They confirmed the tibia break, but decided to keep her in a splint rather than a cast. This means no weight bearing until at least our next evaluation in Vail, Colorado. So we will stay on our travel plan and modify activities and inns as needed.

Our first outing t was a trip to Astoria’s Maritime Museum. It turns out that the entrance to the Columbia River from the Pacific is no easy chore. The River brings tons of silt from the mountains inland which collected into sand bars. These underwater mounds were continually shifting, so the passages were never consistent. Also, the meeting of water rushing out into the ocean and the Pacific currents, along with the strong winds, caused heavy surf and/or fog. There was a memorial with the hundreds of ships lost trying to navigate their entrance or departure from the Columbia Bar. Today, the channel silt is dredged regularly, but local pilots still guide ships in and out.

Next, we ascended to the Astoria Column. This is located at the top of the town ridge and included a circular tower for even better views of the surrounding area. I thought, from a distance, it was Astoria’s version of SFO’s Coit Tower.  The tower includes a circular mural of the city’s history. Mrs Bear gazed out from the flat as I climbed to the top. Usually it is the other way around. The views, as one can imagine, were splendid. 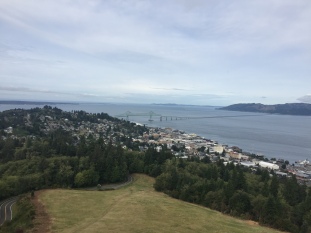 A couple more pics of Astoria and the Columbia River. These were taken while dining. We’d like to come back here someday with regular mobility and spend time in the outlying estuaries and wildlife sanctuaries. But it was still a remarkable visit.