Our visit to Olympic began by boarding another car ferry, from Vancouver Island to Port Angeles, Washington. This ferry requires early arrival in order to go through USA Customs beforehand. Our only declared purchase from Canada was a wheelchair that we will jettison, via donation, as soon as medically indicated. The ride was just short of two hours and the ferry was comfortable. Unlike the weaving-through-Islands route between Vancouver and Victoria, this trip was open channel to the Washington coastline.

Our destination was the Kalaloch Lodge within Olympic National Park, about 90 miles down the coast. So we loaded up with gasoline, Coke Zero, and stretch pants that Mrs Bear could get over her leg splint, and turned our vehicle south. We soon entered the Park. I had never been to Washington’s Northwest corner, but my previous readings indicated that Olympic was a rainforest. This turned out to be partially correct… Olympic is a rainforest, a coastline with endless beaches, and coastal mountains. We quickly entered a beautiful forest which seemed to be more moss and lichen than trees. A diversion brought us to Crescent Lake for lunch.

Crescent Lake was formed by glaciers during the last ice age. It was originally larger, but a landslide after an earthquake separated it from the now Lake Sutherland. The local native Indian tribe tells the legend of their God becoming angry at warring tribes and hurling a boulder that split the lake. Crescent is about ten miles long, and has a blue color due to a lack of nitrogen. The official depth is listed at 620 feet, but was more when the depth sounding technology was less sophisticated. The two photos above were taken at the same point, with the camera pointed 180 degrees opposite. Just a beautiful spot.

One more thing about Crescent Lake… When the landslide occurred, fish were trapped in the lake, unable to swim to the ocean. Two species of trout evolved from this new lake eco structure…They are found only in this lake. What did they say in Jurassic Park: Life will find a way !!

I loved looking out to the ocean. It was really hard to see where the water ends and the sky begins. I count five distinct layers of water, sky, and clouds in this photo. Turn one more time to look down the beach, the view looks like this:

This beach was endless in both directions. Walking down the beach brought me to the “Tree of Life.”  The root structure over this tree cave was amazing:

One more interesting feature of this amazing location…Go back up to the photo looking out to sea and notice the shallow creek making its way to the ocean. In late Autumn and Winter, Kalaloch Creek becomes a torrent, ripping trees from their anchoring land bases to float downstream to the sea. Hard to imagine, right !!?  Well, observe the debris: 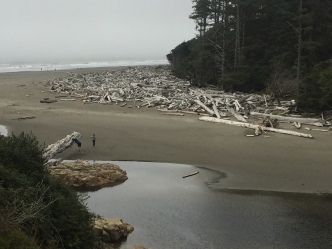 I was told by the staff at the Lodge that these trees become quite dangerous… They can give way and roll further downstream, or simply change position. Enough people have been hurt or killed that these have become known as “Killer Trees!!!” I couldn’t help myself… I had to have the keychain !! 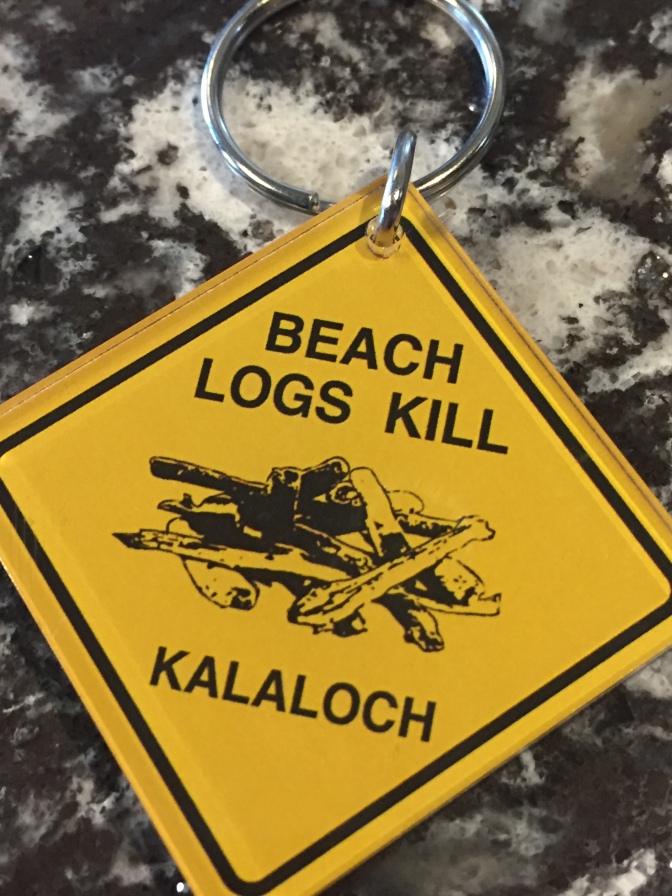 Mrs Bear and I took a drive south on our last afternoon for two reasons. First, we drove a loop through the rain forest. Behold: 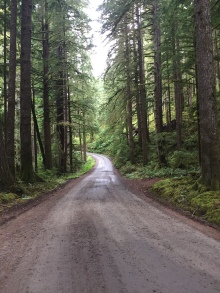 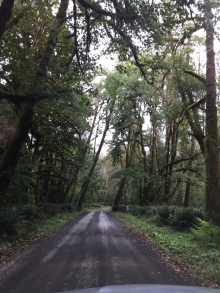 Second, we were told there was an Internet cafe in the area. Our Lodge was completely cut off…No TV, telephone, or internet. We had lunch and checked to make sure our next destination could handle Mrs Bear’s accessibility needs. 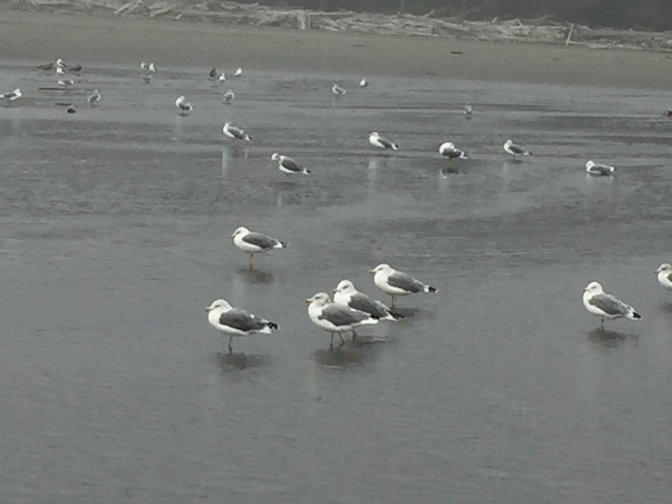 Here’s the ocean on the morning we left…The sunshine and clouds added their distinctive qualities to the artistic layers of sand, water, and sky. The whiteness and shape of the cloud reminded me of Denali… Simply amazing !!

Grew up in California...Went east for college and, later, work, and never returned to California as a resident...Have a Ph.D. in Clinical Psychology...Worked in private practice settings for most of my career...Now retired...Married to Mrs. Bear (Lela) for 46 years...Spent most of my youth travelling the beautiful landscapes of our continent...Am now in a time window to see the rest of the world, and report some of my impressions on the Blog. View all posts by barrybrink