A little more about Talkeetna… This is our second trip to Alaska, and our pattern has been to trek into Denali for three nights, and then stop off in Talkeetna for a couple nights as a breather before heading south to Kenai.  As mentioned earlier, there is no guarantee of seeing the mountain…Denali is usually covered with a shroud of clouds, fog, or in today’s case, haze. Most travelers never see it. We are six for six on our days in the park…and we are zero for four in Talkeetna. Our lodge, which sits on top of a hill two miles from town, boasts a beautiful deck for viewing the whole Alaskan Range. Here is today’s view:

On both of our trips here, we scheduled small plane flights to view the mountains and glaciers. Both were cancelled due to poor visibility. So this time, we adjusted by cruising upriver on a jet boat.

I have never considered this in the past because it seemed a little too touristy (not at all like landing a pontoon plane on a glacier !!). But in Denali, I learned a lot more about the glaciers and rivers.

The photos above show glacial rivers. While not easy to see the true extent and size, these rivers flow on the pathsof receding glaciers which still lie at the river headwaters and fuel their flow by snowmelt during the warmer months. The flow is thus highest in midsummer, and has begun to recede by August. As winter begins, the glaciers stop melting and the river flow drops to about 20%. Then the rivers freeze over altogether. This is an amazing phenomenon…It is hard for me to imagine that a river with a ten mile current can actually freeze over !! But such is Alaska.

Back to the jet boat. It looks kind of dumpy, but it was outfitted with three engines that produce a total of 2000 horsepower. She needs almost four feet of water at docking, but on the move, she requires less than 12 inches !!  The ride was not an amusement park thrill…Rather, it was incredibly smooth. We cruised at 30 mph upstream (that’s 40 mph against a 10 mile current), and cranked the speed up to 40 mph downstream ( you can do the math on this one). 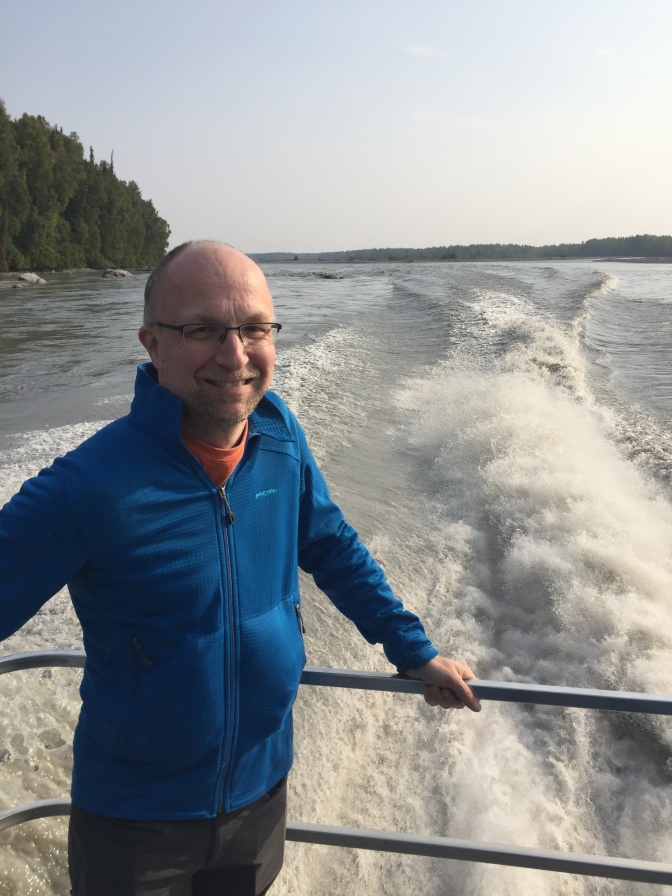 The cruise went upstream on the Chulitna River, a tributary of the Susitna River. These are Athabaskan names…The “na” means “river,” and the prefix is a description. If I heard correctly, the Chulitna means “river of tall trees.” Since the salmon were running, we saw many bald eagles, and stopped at a creek that was flowing into the river. It was amazing to watch these fish attempt to jump over the rocks to swim upstream. It looked near impossible to me, but our naturalist said some make it a half mile up !! The eagles and spawning fish were too difficult to photograph on my I Phone, so you’ll have to wait for my telephoto Canon shots in a couple months.

We also saw a couple cabins along the riverside. These dwellings were built by people who applied for a land grant, free of charge in the 1960s. Twenty acres were GIVEN, on the condition that dwellings be built and occupied, and some sort of occupation was achieved. For example, settlers could grow a crop. Many worked for the railroad.  The cabin you see was originally 20 yards further from the shoreline. When the ice breaks up, it rushes downstream and causes tremendous shore erosion. Our driver stated that this cabin will need to be relocated further from the shore, or it will be lost to the river currents. BTW, these cabins are completely off the grid. They use generators and solar panels for power, have outhouses, and filter the silt out of the river for water. This cabin was about 15 miles from Talkeetna. There is an off road track for ATVs. In winter, the river can be navigated by snowmobile or dog teams. There is also a train that stops on demand, and settlers can ride up to Fairbanks for supplies. They can then return the next day. There is one such round trip train during the winter months each week. 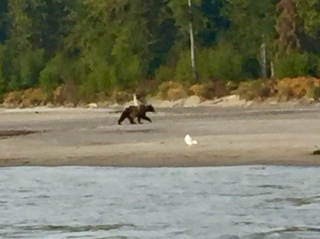 Our final adventure on the cruise was the sighting of a grizzly. Our crew was very excited because it was the first they had seen all season…Black bears are much more common. We watched as she (according to our naturalist) walked down the shore to its end. She then entered the water and swam/floated past us and Talkeetna.

One local funny to close. Our train to Anchorage and its smoke hazards awaits.