Before launching into today’s touring destination, a few words about yesterday… The picture above captures two of our loves. Mine was the pleasure of walking and playing a fine Irish golf course. In the distance are the Wicklow Mountains. Mrs Bear found a personal guide who walked her up and through Sugarloaf Mountain in the distance. 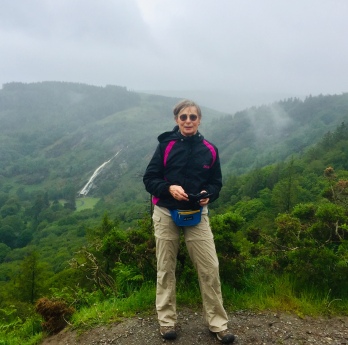 We both walked about six miles with ascents and descents. But Mrs Bear laughs at me when I tell her of my challenge of hitting shots onto tight fairways, then carrying my bag to find the ball, while the Irish ( and Scots) add wind, cavernous sand bunkers, and an incredibly strict ethics code that our President could never play by.  All Mrs Bear had to contend with were rain and winds that tried to blow her off the mountain. Anyway, we both found a wee slice of Nirvana!!! 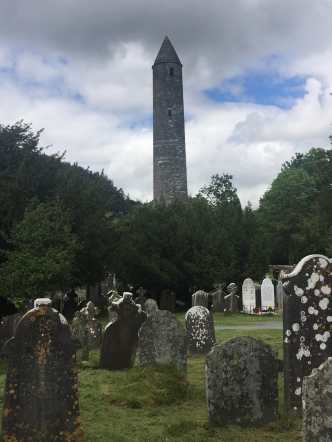 Today we took a drive through the Irish highlands to Glendalough. It is really difficult to describe this terrain. Mile upon mile of low shrubbery, brown to green in color…No trees…The closest thing I could relate it to was the tundra of Alaska. We drove down in elevation and began to see forests and sheep grazing on the hillsides. I don’t know about the sheep population, but there are more cows in Ireland than people. Eventually we found our way to Glendalough. The story goes that a Monk named Kevin came here in the 5th century to study, meditate, and become one with God’s creatures. He lived a hermit’s existence on a barely sustainable diet. And just like Forest Gump, his introverted lifestyle attracted disciples. Soon there were enough to begin a monetary. The photos above are the ruins of St Kevin’s Monastery. The settlement lies adjacent to two lakes in a beautiful valley with water careening down the mountainsides into the lakes. It is one of the most beautiful places I’ve visited, and it’s easy to see why Kevin selected Glendalough as his site to become one with nature and his God. 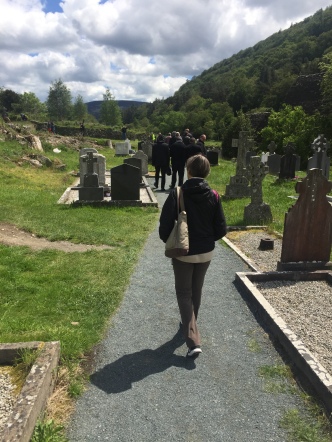 Sadly, people who did not share his exact religious beliefs burned the monetary out two or three times in the next couple centuries. The site was eventually abandoned as a monastery, but the commitment of this lone monk remains respected, and the valley’s beauty is protected.