I know, I know…   I have already reported my ten cents worth on Disney. And my comments suggested a closing… However, extra coverage must be included if the opportunity arises to accompany the Disney Veterinarian!!!

My daughter, Dani, by day, is a mild-mannered Vet in Williamsport, PA… But, by night, she dons a special white coat and offers her services to the animals of DisnetWorld!! Below are a few of her services on a recent house call: 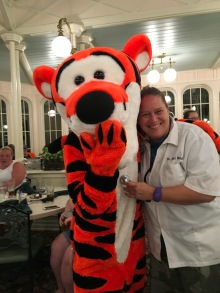 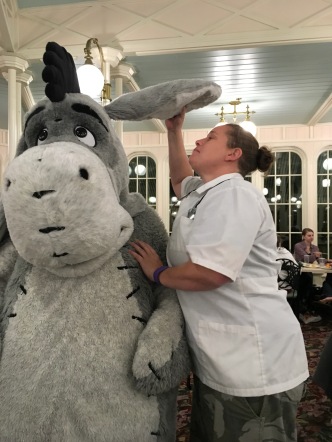 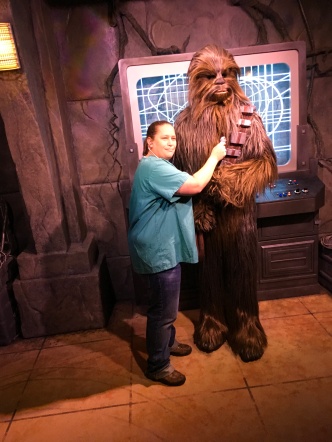 Dani,s first patient was Goofy, who had a strained left knee, which is a problem when a dog has to spend his entire life standing on rear legs while becoming a master of physical comedy…X-rays were negative. Dr Brink prescribed heating packs and rest for three days…

Next, was Donald Duck, a personal favorite of this author. Donald had experienced even more intense laryngitis, caused by intense rants at Chip and Dale for stealing the bottom of his sailor suit. This theft occurred over thirty years ago, causing Donald to roam the streets of Disney naked. The cold finally led to  a scratchy voice, understood by only the most zealous Disney disciples. Dr Brink prescribed hourly soaks in the jacuzzi at Animal Kingdom Lodge and a fitting for an Army costume.

Soon after, Tigger showed up with a broken tail…He had been unable to bounce for two weeks, a fact that was hidden by inserting a tiny jet pack up his butt. While Tigger’s bounces became even higher, the jet pack caused terrible constipation!!!  Dr Brink fixed Tigger by ordering an  splint, made from Brazilian rubber bands, dyed orange. This supplement was to be removed in ten days when Tigger got his regular bounce back !!

Eeyore was her next patient…While also complaining of a broken tail, Dr Brink determined that the bigger problem was Eeyore’s very retarded metabolism and movement pace…A neurological exam revealed a very slow heart rate, caused by a daily dose of sedatives and antidepressants, added to his food… Dr Brink replaced the barbiturates with a mild amphetamine. But, the resulting energy and associated optimism drove everyone at Disney to plot an assassination, of the obvious donkey impersonationating Eeyore. Dr Brink prevented this murder by reversing her prescriptions to the original Seconal …

Finally, Dr Brink was faced with her most difficult consult on this current house call: Chewbacca !!! No one was really sure how to treat his sudden speech stutters and dyslexia…Becuse no one could understand him when things were normal. Dr Brink discovered a long-lost reference library of medical books delivered from the planet Kashyyyk. These materials were written in the cores of an indigenous plant and guarded by Trader Sam on the Jngle Boat Ride…Dr Brink traded three fake shrunken heads for these scrolls. A careful estimate of their information led to the prescription of a mouthwash consisting of ketchup, mud from the Dead Sea, and a particular salt water that had been contained in barrels on the Titanic. Persoanally, I can‘t tell a difference in Chewy’s voice or stutters, but Dr Brink, after swallowing a portion of this vile concoction, now speaks perfect Kashyyykian !!!  I hope she gets her regular voice back when she returns to Williamsport !!!

One thought on “DISNEY VETERINARIAN”