A few years ago, Mrs Bear and I had the good fortune to set up our own land tour of Alaska. On a beautiful drive between Seward and Homer, we chanced upon a lodge that was built upon one of Alaska’s best fishing rivers. The lodge was one of four built by Norwegian Cruise Lines in order to set up land tours for their cruise passengers. 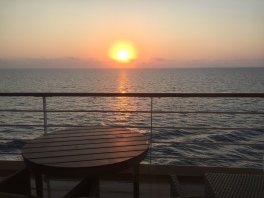 This is a long winded way of saying that our stop in Belize was actually a day spent at a privately owned Caye. It was beautifully developed by the same cruise line, the parent company of Regent, our ships of choice.  The positives were that we had a beautiful sunrise at sea as we approached the Caye, there was a lovely ocean lagoon, and a host of activities to choose from.  The negative was that we never really saw Belize, the country, or learned any of its heritage, history, or culture, as we had in Guatemala.  I had to look it all up on the internet.  I’ll only say that the name “Belize” has always been somewhat vague to me.  It turns out that my generation grew up knowing it as British Honduras. My reading appeared to confirm my belief that Belize is one of the more stable countries in Central America, and is widely known for its beaches, reefs, and ecotourism.

Back to our day at Harvest Caye. After swimming and soaking in the Caribbean waters, Lela decided to walk over to the Lighthouse, which was actually a central post for the islands zip line network.  While  expecting and desiring to pay for this thrill, we were very surprised to find out that most of the activities were included. For those who have done zip lines, most are through rainforests. This makes the height deceiving because you see mainly branches of the trees. This was true the other day on the high cable bridges in Guatemala. Today’s soaring was over beaches and looked considerably higher. Since this Bear has no fear of heights, (at least now that it is over), off we went!!!  I absolutely love these experiences. The photos are vague because you can’t stay on the towers when the next person is coming 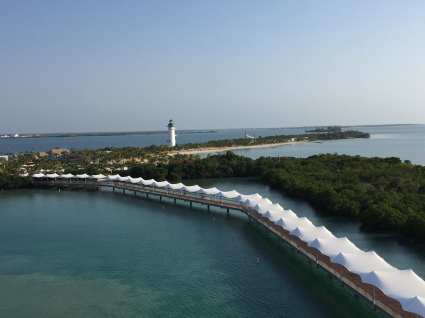 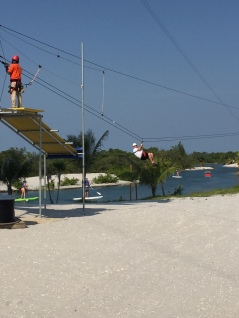 So we are off to sea again, heading north having a nice R&R day behind us. And after all, this is why most people come to the Caribbean in winter.

Our captain determined that the currents and winds made anchoring in Routan, Honduras unsafe.  So we are heading to the Cayman Islands a day early. Maybe we will get an extra day there. Will let you know.

Today was our last port stop in Georgetown, Cayman Islands. These three primary islands lie off Cuba’s south shore. They are popular for a number of reasons: First, they appear to be beautiful, although we personally did not travel outside the port (at least on land). Second, the waters ARE fantastic…Very clear with an extensive reef within swimming distance of the shore.  Third, they are geographically located, either on the way from or to Miami…one sea day away.

Because of these advantages, we found ourselves in the middle of a cruise ship city. As one staff member put it, the only lines missing were Disney and Cunard.  The population of Georgetown is 40,000 and our Cruising visitors could have easily added 10,000. All were anchored in the harbor and had small shuttles cruising  back and forth from motherships to the port. Our vessel was actually one of our lifeboats and was lowered and raised from just below our cabin

Our snorkeling trip was quite strange in that we only traveled a couple hundred yards out from the port. I initially was not happy about this…Too much traffic and pollution. But there was a wreck to snorkel over and the the beginnings of the reef. The water was crystal.

Our second spot was no further off shore, but away from the port. In the above video of the cruise ships, you can see that the distance from the shoreline to the ships was about a half mile. The cruise ships were in 5000 feet of ocean depth!!!!   The reef is close in and the drop off is quite sudden

On this second snorkel, it was nice to see the fish, but more fun to watch the scuba divers. They began at the shoreline and kicked their way through tunnels in the reef. Sometimes you could see the bubbles but not the divers. 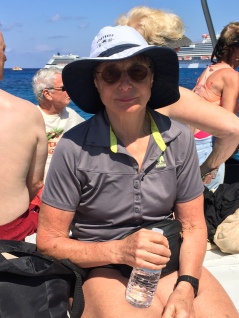 So we finished and decided to head back to the ship rather than walk by the Harley Davidson rental or Planet Hollywood. It turned out to be a great decision because the clouds and surf became unsettled.  This made it hard to tie up the lifeboats to the ship door, to the point where they suspended anyone from going back into port in the PM.  It also showed off the skill of the pilots

So I guess it’s time to head for Miami. It’s raining!!!