First, a brief note about Mexico. We had two port stops there, but I didn’t get too enthused. Also, we were not allowed to take photos during our dolphin swim or scuba dive. BUT it was very cool watching Mrs Bear get so excited in the dolphin pool.  This is a controversial issue, but they are beautiful animals.

One more note about Mexico. In this southern region, there is a very strong Mayan heritage, and the people are proud of it. 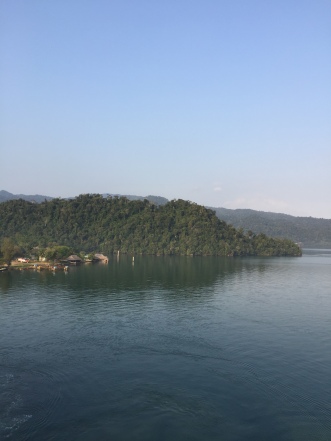 So the following day, we tie up our ride in Guatemala, a Central American country south of Mexico. We bypassed Honduras and Belize, but we stop there on our way back. I have included a photo of the port because it was really the first we have had since leaving Miami. Beautiful, green hills jutting up from a mainly undeveloped coastline. The last time I saw so little development on a coast was in Albania. We then set off on a ninety minute bus ride through the countryside…In town, lots of small shacks for homes with people selling cooking, pineapples, and other day supplies from the roadside

Our guide, Julio, who had just come down from the schoolyard, gave us a brutally honest account of his country. First, he talked about his Mayan ancestry and how he was bullied for it in school. He also lamented that Guatemala is “losing its heritage.”  He remarked that five Mayan languages are nearly extinct in Guatemala. I found this very hard to understand. The Mayans were GREAT!!!   What and why are people ashamed of this???  Maybe it is somewhat like many of our residents viewed, and view Native Americans.

Julio also spoke at length about his country’s political system. I had recalled hearing for decades that Guatemala was volatile and unstable, with continuous guerrilla resistance to the authorities. It was never considered a very safe place. Julio says these guerrilla actions have been replaced by drug dealers, which is worse

Guatemala, according to Julio, has two political parties. The left is run by all the rich folks, landowners, business magnets, and old money…The right party is military. AND they are in a prearranged understanding of shared power. Elections are held every four years and the candidates promise to do much for the people, but Julio bemoaned that these promises are forgotten the day after the elections are held. I found myself thinking That I’ve heard this story before in many contexts

Mrs Bear commented later that Julio’s blunt honesty was a testament for the strength of his country’s democracy…One could be poisoned or arrested for such comments in many other places. 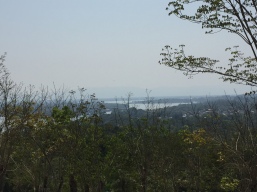 A couple more Julio comments as we motored past very green landscapes. The average income in Guatemala is 4-500 dollars/month. Not enough to live on so both parents, and sometimes the children, all work. The politicians in their Congress receive $8000/month, and are all very corrupt.  It’s easy to see why this was an unstable country in the past. Something tells me it will become volatile again in the future.

As our bus ride continued, the land became more hilly, but always green despite being in the dry season. We saw many cows who looked like mountain goats, grazing on the steep hills. Julio told us that the USA is their primary trading partner, and the chief export is coffee. They also send us lots of tropical fruit: pineapples, melon, especially bananas, and guava. 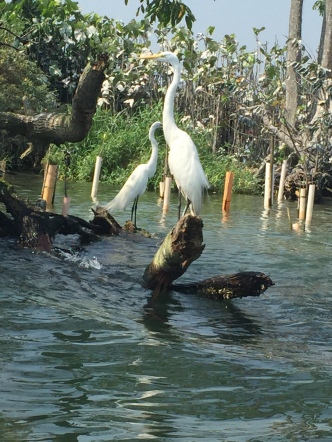 We finally arrived at our destination, Guatemala’s biggest lake. Lots of big yachts including a few with registries from Texas and Arkansas. The lake connects to a river which leads out to the ocean. We go on a short ride past bird sanctuaries and tie up at an eco-resort. The gentleman who bought and developed it explained that it used to be one of those hilly grazing lands with a rubber tree plantation at the high end. Some years, the tourism carries him along…Some years it is the rubber. The shore’s end included the bar, pool, and a series of very small, triangular bedrooms, which were accessed by the walking over raised wooden pathways

We then set off on a hike of the property which started on a series of low cable bridges, similar to Tom Sawyer Island. The trails soon gained elevation and we entered a beautiful rain forest   The view from the top included the lake below. Our host showed up in his ATV and explained how his rubber trees work.  A strip of bark is cut away and the rosin flows into a bucket. Unlike maple trees, the rosin is just under the bark, not inside the tree itself. Rubber trees stay active for about 20 years. His products is used primarily in the making of latex gloves and tires
We start down and the real fun began. More cable bridges, but these were narrow and 50-60 feet above the forest.  It was hard to see the depth because the forest was so lush. Back to the lower bridges and back to the lodge for lunch, a swim, and Gallo, the local beer.

A few more facts about Guatemala…They export 6.5 tons of coffee to the USA annually. The total population is 16 million.  One million are illiterate. There is only one State University, and it is extremely difficult to get in. There are private schools but the masses can’t afford them. Healthcare exists for employees of the State and large corporations. The masses have to pay. It seems to me that all of these realities help to maintain the current political system:  The rich get rich and the poor get stuck. I remember attending Military School as a youth with a number of kids from Central America   Their families wanted them indoctrinated into the power structure of their homelands early on