Prior to the beginning of our sojourn to the South Pacific, we saw a feature on CBS Sunday Morning ( a great show…a kinder, gentler 60 Minutes) about the Shangri La Museum in Honolulu. Mrs Bear and I were both impressed to the point where we purchased tickets for a tour during our time spent on Oahu. To visit, one must purchase tickets way in advance, show up on time at the Honolulu Art Museum, get on the shuttle bus for the 15  minute ride to the Duke residence, and become entranced during the 75 minute walking tour. 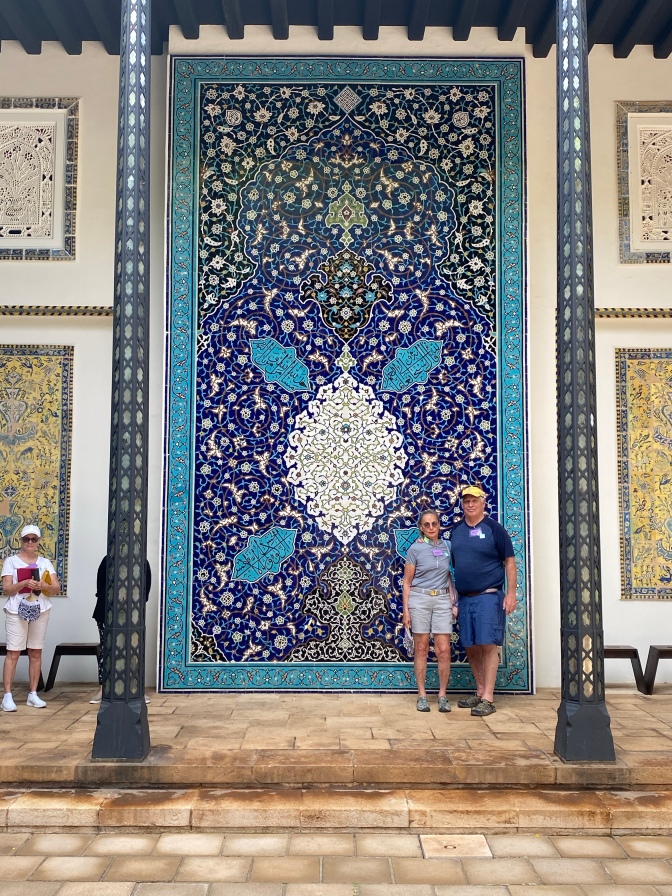 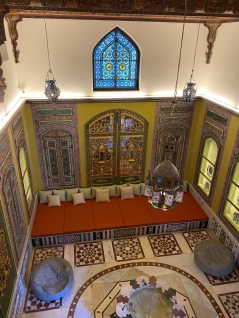 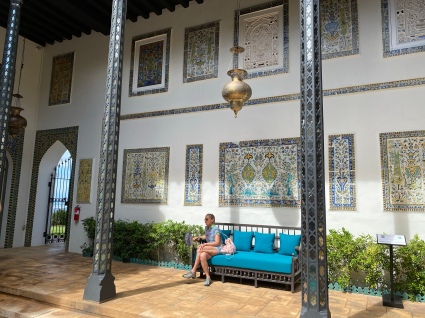 Doris Duke was born into a family of affluence. Her father made a serious fortune in the tobacco and oil industries. His daughter, like most privileged women of her time, was educated by tutors at home and boarding school. She inherited bunches of money at 21, and like her father, developed a love of philanthropy.

A little while later, Doris got married to James Cromwell. They embarked on a year long honeymoon around the world in 1935.

One of their stops was Agra, the home of Mughal architecture and the Taj Mahal. Doris fell in love with both.  Later, they arrived to the Hawaiian Islands for a scheduled week at the end of their year, but loved it so much that it was extended it to four months. They became friends with a prominent, native Hawaiian family who introduced them to the culture and traditions of island life. Next, they found five undeveloped, seaside acres and built a home reflecting their acquired love of Hawaii.

Doris also incorporated her love of Mughal architecture into the house plans. The photo below is her original bedroom suite based on the styles of the Taj Mahal:

Doris and James eventually divorced. Doris maintained her Hawaiian residence, spending winters there. Over sixty years, she collected pieces of Islamic Art and culture.  The piece that fascinated me is called a Mihrab, an Islamic prayer niche in a wall that indicates the direction of Mecca… 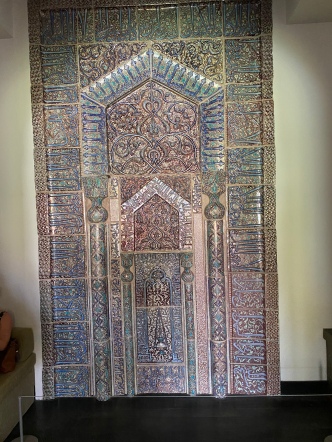 it is hard to see in the photos above, but this piece is actually a composite of 30+ smaller sections that were fit together with some sort of plaster to form the full design. This one was constructed in Iran (Persia) in the thirteenth century. Doris paid 150K for it in an auction sometime in the 1930s. To put this in perspective, she paid 100K for the five acres of ocean front within a half mile of Diamond Head during the same decade. Our guide, after relating this story, wondered whether the Mihrab would still be the more expensive piece ?? I vote for the Mihrab…The home would have a price, huge…but there would be a price listed. The Mihrab is priceless!!  One more tidbit about the Mihrab: Doris did not have it mounted to face Mecca as she is not a practicing Muslim. However, she set it to face in a direction 180 degrees toward Diamond Head. 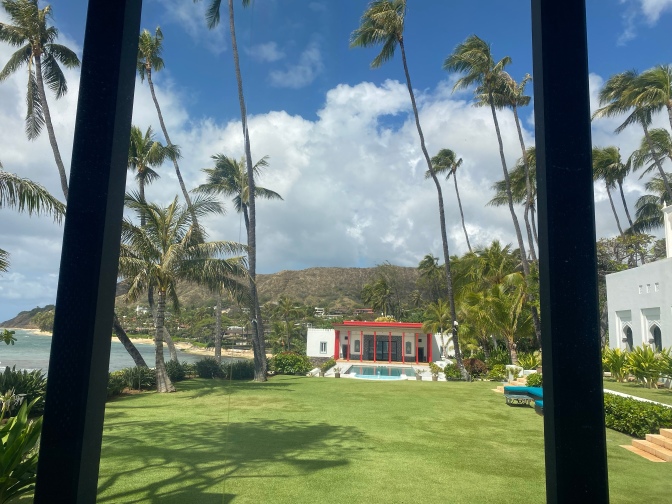 Here are a couple more pics from the house, looking outside to the ocean: 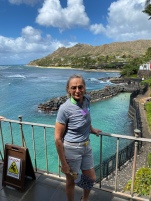 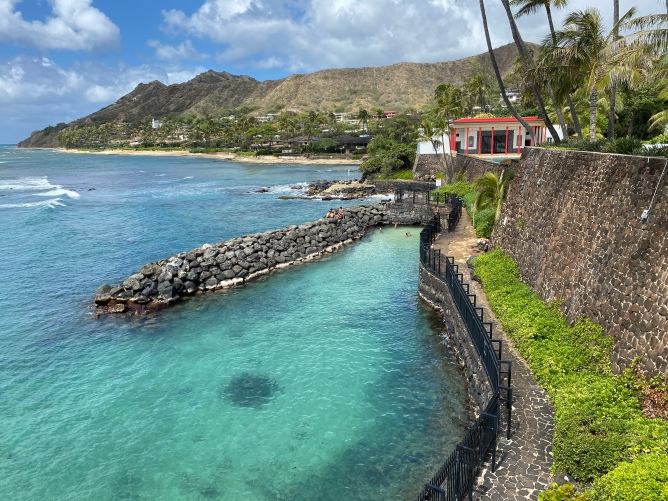 The local kids were able to access the point below utilizing public access…All beaches in Hawaii are PUBLIC access. It is easier to see Diamond Head in these photos as well.

The photos below show the pool and grounds. This is the opposite angle from the Mihrab in the house.

A few more photos of the art collection in the house. Doris Duke set up the home to become a museum upon her death. She did the same thing with her other two major properties, a primary residence in Newport, Rhode Island and the childhood home on a farm in New Jersey. All of these Foundations are independent, and thus do not compete with one another for funding.

The final part of the tour led us back to the home entrance to revisit the banyan tree in the courtyard and the gardens: 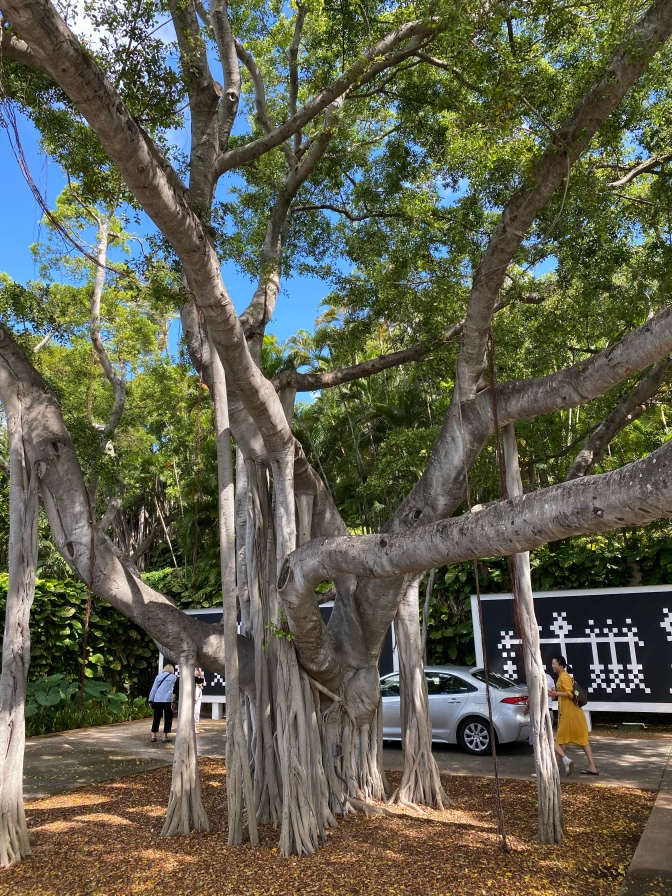 I am not sure if this tour was more about the house, the lady, or the art. But combined, they make Shangri La a “must” when you visit Oahu. Thanks CBS for running the feature and bringing it to our attention.