The main transit from North to South Island is by ferry. Ours from Wellington took about 3.5 cruising hours. We had done this a few times recently while traveling to the Shetland Islands, so we felt pretty knowledgeable about the process. We boarded and went immediately to upgrade our tickets to lounge access. This provides the equivalent of domestic first class airline seats, $15 credit per person for anything on the ship, and a location midship, all for $20 each. This location was important as Mrs Bear and both her sisters had gotten motion sickness while sitting in lesser value seats in the stern, while ferrying to the Scottish Hebrides.  We both slept some and the swells were manageable. Mrs Bear arrived, and kept her breakfast where it should be.

The crossing through the Cook Strait (lots of things named after Captain Cook here), was scenic.  I snapped the pics above as we encountered the shoreline of the South Island. 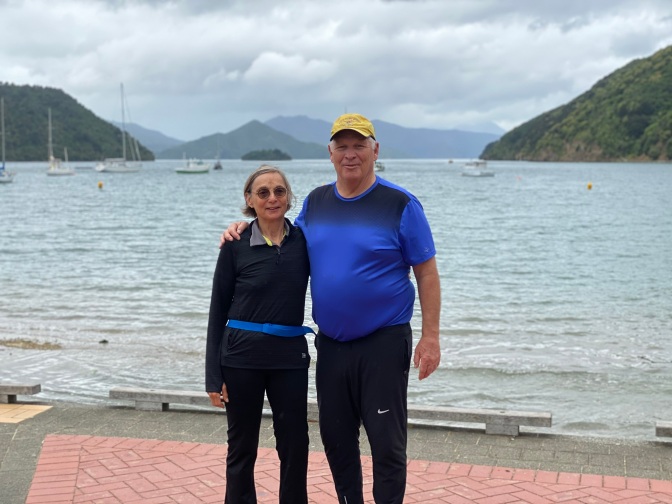 We were delivered to the port town of Picton. We snapped these two photos from roughly the same spot… One looking north to the Cook Strait, the other looking south to mountains yet to come.

Picton had one surprise for us before we left. As we walked along the edge of the local Maritime Museum, I heard something call to me from a shed. It appeared to be the ruins of an old wooden ship.  So I called back and asked what it wanted.

BRB: OK, Pleased to meet you… You look like you need some major repairs.

EF:  Well, my sea-going days are over, and I’ll probably never get out of this shed. But I’ve got some tales to tell if you have a couple minutes.

BRB:  I always have a couple minutes for a talking ship.

EF:  Yes, well, I have a story to tell… For starters, I was built in an Indian shipyard in 1853, but I was sold to an English merchant and named the Edwin Fox.

BRB:  That explains why you look so old !!

EF:  I am the ninth oldest merchant ship left. I’ll bet you look pretty frumpy if you live to be 167 !!

BRB:  My wife thinks I sometimes look frumpy now. Anyway, what else were you up to.

EF: Well, after doing some troop transports for the Crown, I started sailing to the South Pacific. I carried troops to India, families to New Zealand, and prisoners to Australia. In fact, I was the last ship to be used for prisoner transport.

BRB: I’ll bet those were some wild times !!

EF:  I’ll say !!  Especially when I had a raw Captain or a bad storm came up.  I stayed afloat, despite their best attempts to sink me.

BRB:  That sounds really important. Your crews must have treated you like royalty.

EF:  They tried, but eventually they thought I got old. It didn’t help that those new-fangled steam engines came out. People started to feel that clipper ships were too much work.

BRB:  So what happened??

EF:  They started using me for local cargoes in the South Pacific islands. Then they brought me to Picton in 1897. I transported coal and foodstuffs. I finally just wore out, but the people here respected my past, and they’ve let me drydock in this museum ever since. It’s kind of lonely… I miss the prisoners especially. They were actually good blokes who got in trouble for stealing wood for fires or food to eat. Some of them were only kids.

BRB: So you were a part of Australia’s history !! That is quite a story.

EF: Well, its been nice telling it to someone. Most people don’t understand my speech. Come back in a couple decades… Ill probably still be lying under this shed.

BRB:  I don’t know if I’ll make it back here. But I’ll share your story in a blog and maybe others will come to,pay their respects.