Traveling south from Auckland, we next stopped in Rotorua. This is a Maori name for Lake (Roto) and Two (Rua). The city lies at the edge of a large sunken crater of an ancient volcano. The area continues to have a lot of geothermal activity… Steam vents, sulfur, and geysers. The Maori were drawn to the area because of the hot springs. Being of Polynesian ancestry, they resided in the areas of New Zealand that were warmer. This was more of a struggle here. In the USA, tribes killed animals and used their skins and fur for warmth. In NZ, there were no mammals to kill, so they came to the hot springs for cooking and bathing. Our  visit to this area was a chance to experience NZ’s part in the Ring of Fire,  and learn more about the Maori culture.

In the morning, we toured a Maori cultural center which was also situated at the primary geyser in the area. The tikis above are eerily similar to those I have seen in Hawaii, and in fact, the migration to both Hawaii and NZ appear to have routed through the Cook Islands. I loved the woven sculpture of the bird. The yarn comes from the underside of palm fronds.

We were able to observe local artisans passing these skills on to a new generation. The Maori make up about four percent of NZ’s 6,000,000 population, and live almost exclusively on the North (warmer) island. They have their own language, and public notices are written in both Maori and English. Another interesting snippet about the Maori… They are one of the few native people who never developed a projectile weapon. No arrows, slings, or spears. Their fighting was up close and in your face, with bayonet-like spears and hatchet-like blades. Maybe that is why the Haka, their native war chant, is characterized by stern faces, evil eyes, and intimidating body movements.

The Maori are an interesting people. They adapted to the lack of animals by being skilled fishermen and burning off vegetation to grow vegetable gardens. They were (and are) active as citizens of the Crown. There were Maori brigades which fought in both World Wars. They adapted to educational systems and utilized the courts to press for homeland rights. 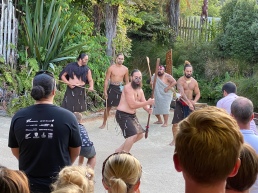 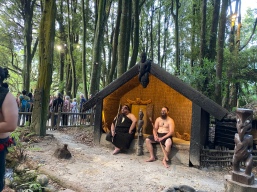 A bit more about the thermal activity. The pic below shows Mrs Bear in front of  local geyser activity and an alkaline pool of runoff steam. The local Maori tribe still uses the pool for ceremonies. In the distance sits the remains of a hotel that was condemned a few years ago by changes in the venting of the steam outlets.

The Maori have a legend that there were a brother and two sisters who resided in the Hawaiian Islands. The brother became adventurous and sailed away to New Zealand. But, becoming very cold, he somehow sent a help message to his sisters. They dispatched two fire spirits to help their brother. The spirits traveled underground…Where they surfaced to breathe are the sites of volcanoes and geysers on the ground.

One more video of the Haka to end the post: