From Cairns, we flew to Sydney, Australia’s largest city at 6.5 million. We spent three days there to conclude our Australia visit.

Coming into Sydney, even at the airport, it felt like entering a major city. The terminal had a big city feel to it, and the approaching skyline reminded me of San Francisco. In fact, a lot of Sydney’s harbor felt a little like SFO.

When we were in Melbourne, there was a lot of talk about the non-rivalry that exists between Australia’s two largest cities. Melbourne acknowledged that Sydney’s Opera House was aesthetically more pleasing, “but our acoustics are better.”  They commented on Canberra, the capital city, being built equidistant between them, “ but it’s really an hour closer to Sydney.” We didn’t hear any chatter in Sydney about this non-competition.  Sydney seems more comfortable with itself. 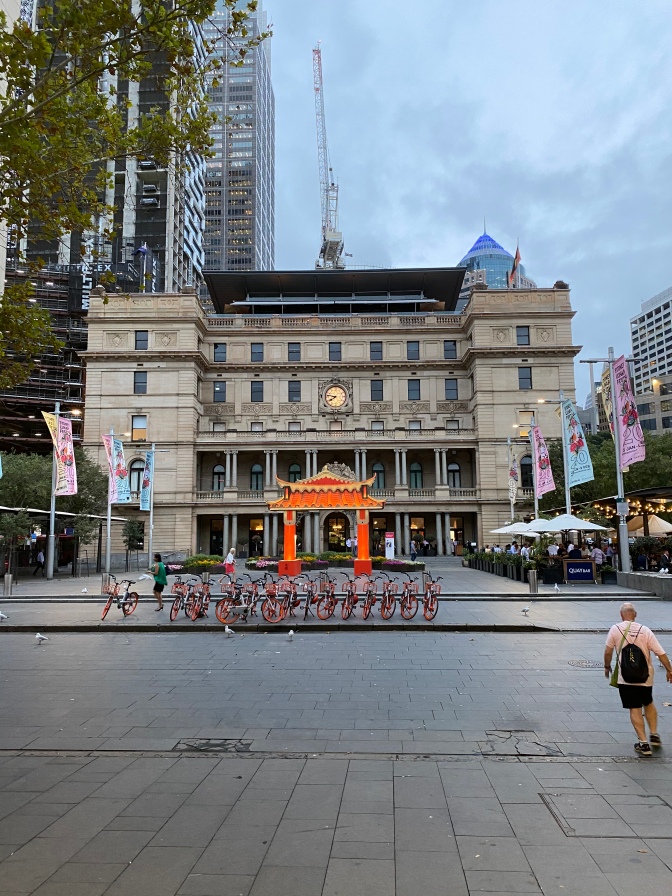 Before coming to Australia, we watched video of the terrible fires and smoke pollution that encircled both Melbourne and Sydney. We got very lucky in Melbourne when the area received dousing rainfall just before our visit. We also had precip and below-normal temperatures in Adelaide. It even rained as we flew to the Outback. The locals said they hadn’t seen actual rain for over two years, but the river washes had water in them for our visit. AND, the temps in the desert, as a result of the cloud cover, were a pleasing 90ish, rather than the usual 110s. I say all this to convey how lucky we had been with the weather. Someone had a pair of lucky underwear.

Well, upon arriving in Sydney, those underwear got washed. It RAINED, and then rained some more, and then it decided to really rain… During our last two days, Sydney got over seven INCHES of rain. The local news described it as a “Rain Bomb!!”  Sydney received more rain in a three-day period, than at any time in the last 50 years. As a result, our visit was severely altered. 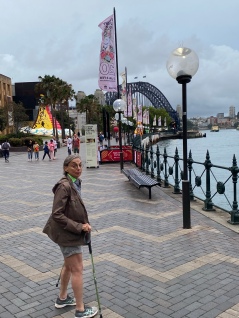 Mrs Bear and I had a couple hours on the evening of our arrival to walk to the harbor. We had an indoor tour of the Opera House on the second day and a dry walk back to the hotel. I’ll pass on a description of our visit to the Blue Mountains until later. Finally, we had one other window where the radar showed no rain for two hours. We jumped up, went out to dinner, and walked through “The Rocks” area under the Sydney Bridge and made it back just as the rain revved back up.

Im sure most of you have heard of the climb of the Sydney Harbor Bridge. If you sign up, the climb is a go except in lightning. Some poor souls lived to walk the bridge during the Rain Bomb, but it wasn’t us!! In fact, we had decided to pass, given Mrs Bear’s continued leg rehab…It was coming down that would have presented the problem, even in dry weather.

We made a trip out of the city on our second day to the Blue Mountains, a wonderful (they say) National Park 55 miles outside of Sydney. We first went to their world famous waterfalls, and saw…Nothing!!  Rain and fog totally obscured our vantages. Next we went higher to see “The Three Sisters.” This rock formation, legend says, is three sisters who were turned to stone by their wizard father to prevent them from running off to Melbourne with boyfriends. But the father then dropped his wand into the canyon below, and to this day, continues to search for it. We were really excited, and saw…Nothing!! Except this time, we came away with photos anyway by posing with the Ranger Station’s image on the wall.

Mrs Bear then posed next to an outside print on a construction wall, complete with umbrella prop. Taking these pseudo pics was actually more fun than the real thing would have been.

A couple more pics from our brief windows of rain suspension. We got a general feel that Sydney is a very walkable city with a lot to see and do… Maybe in our next life!!

One thought on “Sydney’s Rain Bomb”