Today, we tried something new… Mrs Bear found an international company that subcontracts guides for personal tours. We set it up, and Shelley asked us what we wanted to see and do. Mrs Bear asked her if she could show us the Jewish district and review its history. It turned out to be interesting in a couple of ways. First, while we focused on the Jewish sector, Shelley explained that Melbourne’s heritage has been to welcome immigrants from many places. Melbourne reportedly has more Greeks than everywhere except the few largest cities in Greece. The same numbers in Melbourne could be attributed to the Chinese and other cultures. 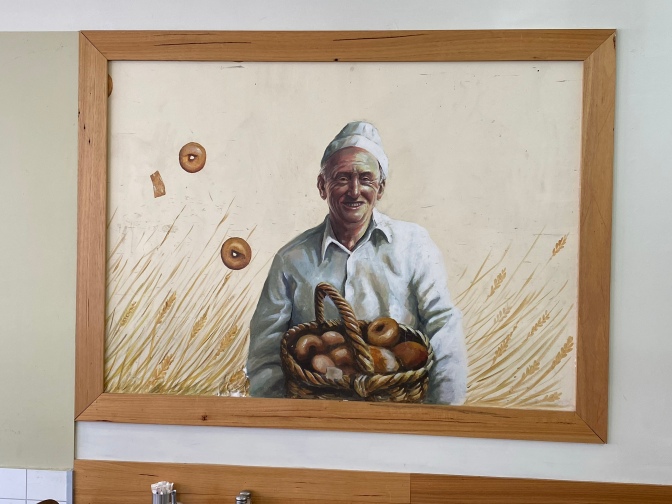 The history of Australian immigration is very interesting. It seems that the British unloaded many of their criminals in America until the War of Independence took away this channel. They then turned to Australia in the 1780s. But many of the men deported were not a hardened lot. There were 11 Jews exiled in the first groups, the youngest being eleven years old. He had stolen a handkerchief. Others had taken bread or spoken harshly to a Lord. These men came over and helped to establish settlements. They became elders and, in some cases, wealthy. Melbourne was established in the mid1800s, and grew when gold was discovered a couple decades later.  Today, Melbourne is about 5 million, which is very close to the size of Sydney. It appears to be the sports and arts capitol of Australia.. And once again, it is a very cosmopolitan city with many cultural influences.  We rode through the Jewish quarter, which is about a 25 minute transit from downtown,  Shelley took us through the markets, bakeries, and butcher shops. The man pictured above bakes about 70,000 challah per week in his shop, more than the number of Jews in Melbourne. We tried one… It was flaky and sweet!! 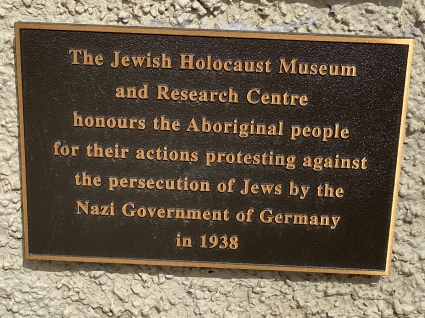 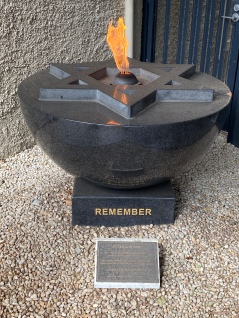 We made stops at the local Holocaust Museum. I was impressed with the plaque near the entrance that thanked the Aboriginal People’s support during the Nazi persecution. 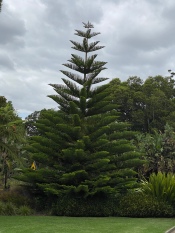 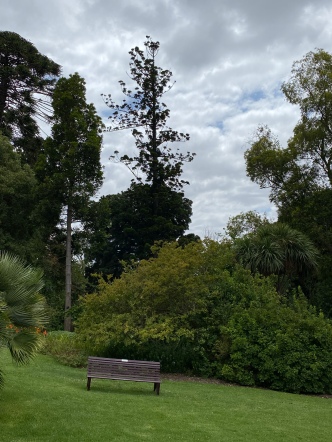 We went back into city center to walk through a section of the Botanical Gardens. Most of the museums and parks here are free of charge. Shelley also told us that an early governor had decreed that Melbourne should be 10% public land, a mandate that remains true today. The photos above are native trees from the Gardens. I don’t remember all the names, but the top left has a name repeated twice. Evidently in Aborigine, this is very common…And the name means “watch out for this prickly tree!” The tree on the bottom left is the Cook Tree, because early sailors cut them down when they needed a new mast. 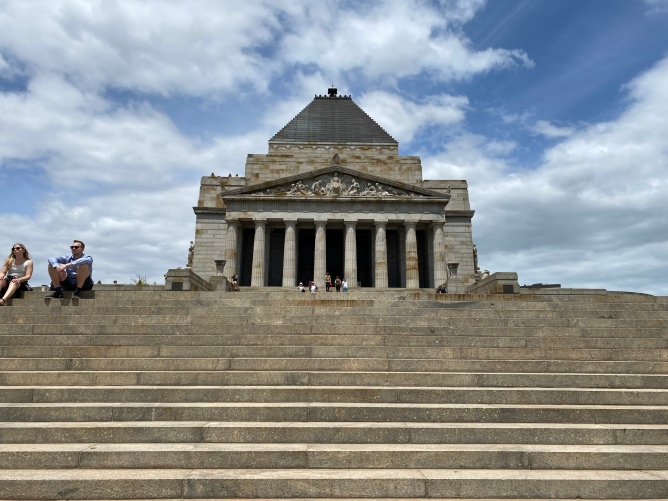 From the Botanical Gardens, we walked to the Hall of Remembrances.  The Aussies are very proud and respectful of their military services. This Hall was built after WWI because their dead could not be brought home. We attended a ceremony at the Shrine (top right) for those  young men who made the ultimate sacrifice.

Finally, a little more fun to end. Shelley told us we needed to check out some of the alleys in the central district. There we would find Melbourne’s street art. The City is very supportive of these ventures, and we were told artists come from near and wide to complete a work. And the tough part is passing the huge number of cafes and bistros along the way.