We said goodbye to Las Vegas and headed northeast to Utah. Our destinations are the national parks in Southwest Utah, primarily Zion and Bryce Canyons.. This is the time of our biggest adaptation, as we had originally booked rooms in the old inns within these two parks…But these old buildings are not wheelchair friendly. So we canceled reluctantly and booked in Marriott’s in towns about 50 miles away. We gave up one kind of accessibility for a different kind of accessibility. We can’t just walk out the door to a red rock canyon, but Mrs Bear can take a shower without having to somehow crutch up a flight of stairs.

So our driving destination was St. George, Utah, just over the Nevada border, and a gateway to Zion National Park. Because of the relatively short distance, Mrs Bear found a detour through the high desert to Snow Canyon State Park… It took us on state highways  to the west of St George. When we got there, the terrain offered our first glimpse of red rock:

We then headed to St George, on the backroads, feeling a little disappointed that the length of the journey hadn’t yielded more extensive results. BUT, on the outskirts of the city, we saw signs for another State Park…On a whim, we turned in and were rewarded with these sights from Cathedral State Park: 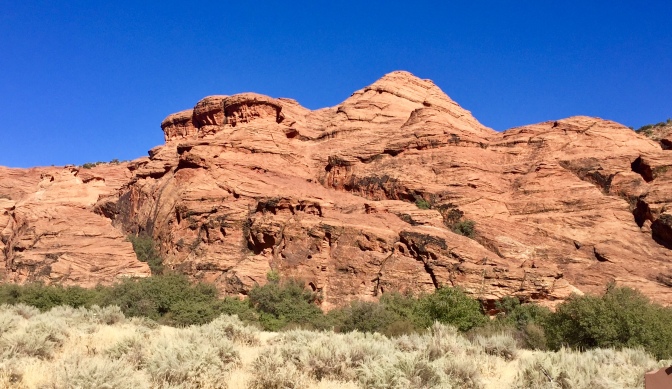 We we would not have seen Cathedral if we had driven straight in to St George.  I was thrilled to find out that these ridges were used as a movie location for the movie “Jeremiah Johnson,” which is one of my favorites. Robert Redford grew to love the Utah mountains after starring in this flick, opening his own ski area and starting the independent movie festival he named Sundance. 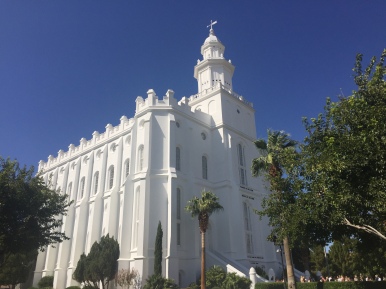 We made one more diversion through town to view the Mormon Temple in St George. Non Mormons are not allowed inside, as these temples are used for religious ceremonies, such as weddings and baptisms. We walked the gardens, enjoying the Utah sun after having been in the car for a good chunk of time.

So we arrived in Utah and got the preliminaries out of the way…The headliners begin tomorrow.