After leaving San Simeon, we traveled another 59 miles south to Baywood. There was really no reason to ever hear of Baywood. More familiar names would be Morro Bay to the north, or San Luis Obispo to the south. But this is the location of my younger brother’s primary residence.

A little more about Baywood… First, I’ll give you the Wikipedia line: Baywood and Los Osos are “Sleepy.” The discussion described its coastal and estuarial setting, its farmer’s market, and its numerous outdoor activities. Residents hike coastal trails, visit State Parks and Elfin forests, whale watch, sail and/or kayak the estuary, observe bird colonies, and drink beer and wine from local craft brewers and vineyards.

Now for my take…Look closely at the pic above. Do you see that little sliver of a peninsula in the estuary??  That is Baywood Park. It did seem kind of quiet (sleepy).  The town isn’t really Southern or Northern California. But it’s far enough south for the general climate to be warm, that is California coastal warm. I was also told that the area does not really get much rain. This is a blessing and a curse. On the positive, days range from grey overcast and fog, to blue skies and sunshine. On the negative, water is a valuable commodity. My brother told me that it is impossible to get building permits for additional bathrooms. The houses rely on well water from an ancient aquifer, which appears to be drying up near the coast. We were shown a couple building lots that were  offered for huge money…But my local family said the lots were not build able because water would be unavailable. Water conservation appears to be a way of life…Yards are brown and natural. My sister-in-law said it would be real chutzpah to grow a lawn.  This is a small town, and has small town advantages…Neighbors seem to know each other, and locals do paddleboard and kayak in the bay…But pay attention to the tide and wind directions, or you might have to call relatives to pick you up. 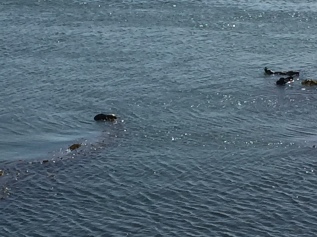 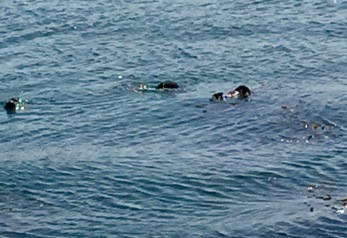 There was lots of wildlife to observe. We went to Morro Bay for the afternoon to let Mrs Bear roll along the bay path and eat local seafood. Along the way, we watched Sea Otters hunt and sleep in the bay. 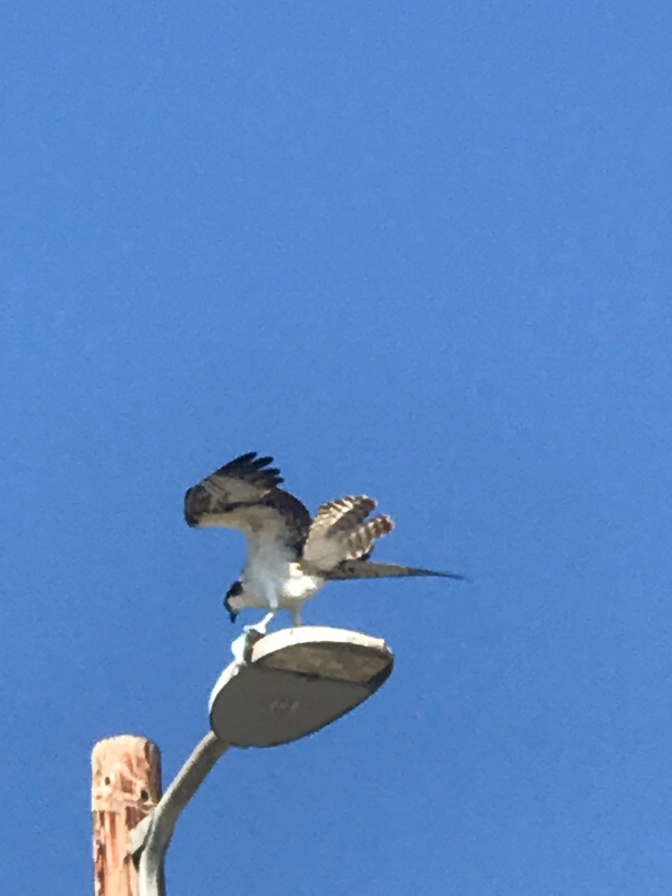 On the way back, we watched an Osprey fly over, land on the lamp post, and eat his dinner. A special sight for a special place.

Finally, a third take…My brother and sister are very much at peace here.  They remodel their properties, create their art, and maintain a flow with neighbors and artists. My brother rides his bike everywhere, while my sister walks and hikes. They see the colors in everything first. They create for the love of it, and sell so they aren’t giving their creations away. They are at peace here…the type everyone searches for but few ever find.

One thought on “Baywood – Los Osos”