I have always wanted to visit the capital of our 50th State, but never imagined I would spend most of it at their local medical center. An ambulance came for Mrs Bear at 0830…She was transported to the ER for Orthopedics to determine the best course of treatment for her broken leg. It was determined that she had a spiral fracture of the Tibia, the larger bone of the lower leg. A spiral fracture means that there was no total break or displacement…Rather, there were a couple cracks that kind of spiral around the bone. Juneau’s X-Rays confirmed this, as well as an absence of any other damage or complications, other than swelling. The plan is to splint the leg and wait for the swelling to go down. There will be a re-evaluation, probably in Astoria, Oregon, when hopefully they will put her leg in a cast for about seven weeks. Most importantly, the ER ok’d us to return to the ship and keep traveling. Mrs Bear really wants to stay on the travel plan. The Port of Juneau gave us a ride back and we settled back into being pampered onboard. 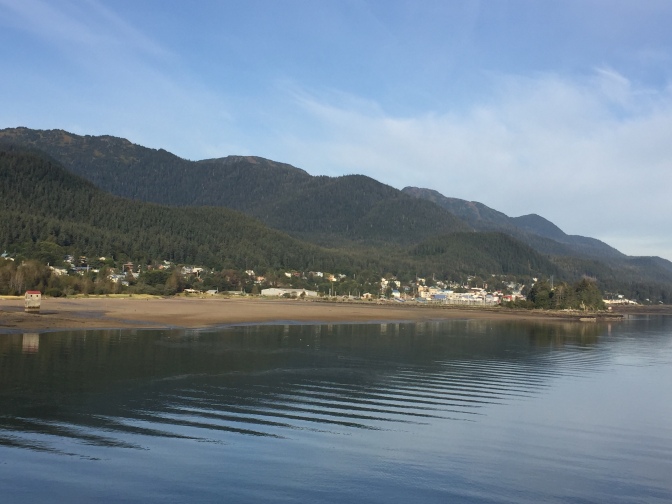 I got Mrs Bear settled into our room, and she encouraged me to get out and see some of Juneau. We had been scheduled to hike near Mendenhall Glacier, which of course, didn’t happen. But the ship docked near the middle of town and allowed me to walk about. The pic above is a shot of Juneau as we cruised up the channel. The pic below is the boardwalk in the center of town. 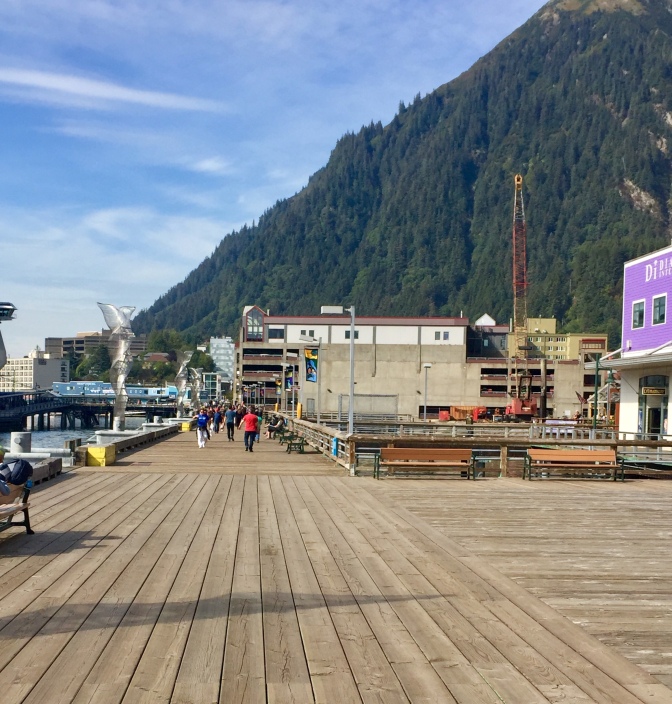 While Juneau is an island town similar to Sitka, it is very different in many ways. First, Juneau is much larger ( app 30K residents). Many, if not most, of the people are seasonal residents. We were told that almost all of Juneau downtown closes down for the winter. In Sitka, the residents stayed and fished all year. Juneau is the State capital, but I didn’t see the government buildings. Instead, my walk went past the regular gem shops, souvenir vendors, and restaurants, tastefully presented. Both Sitka and Juneau have lively bar scenes with local fishermen telling tales of that day’s catch…And NEVER ring the bells !! It means you are buying a round for the house. 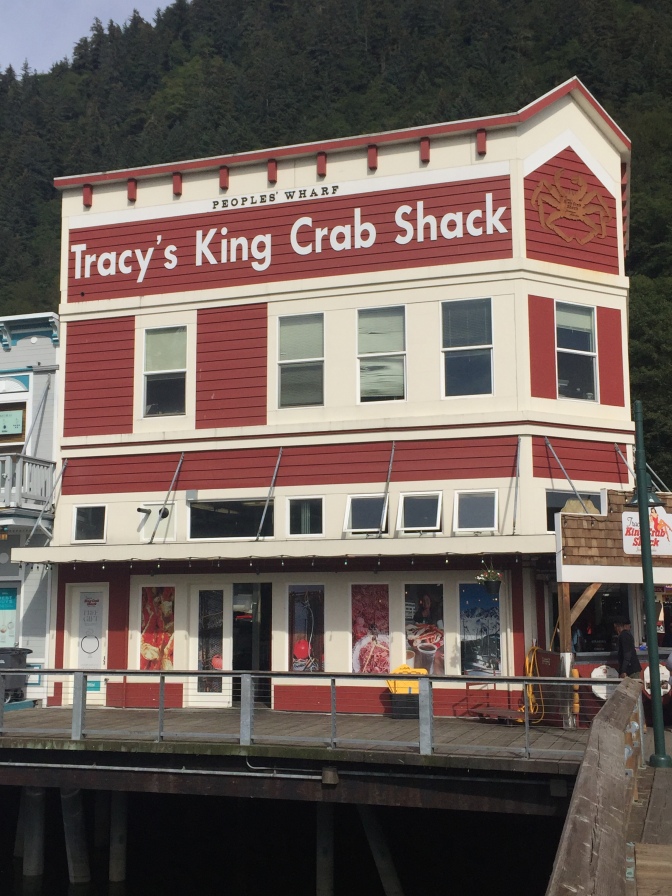 On on our trip to the Medical Clinic, I asked our EMT what I should do for my afternoon ?? She replied that the Alaska State Museum was fantastic…So I walked through town and took her up on the suggestion. And she was correct… 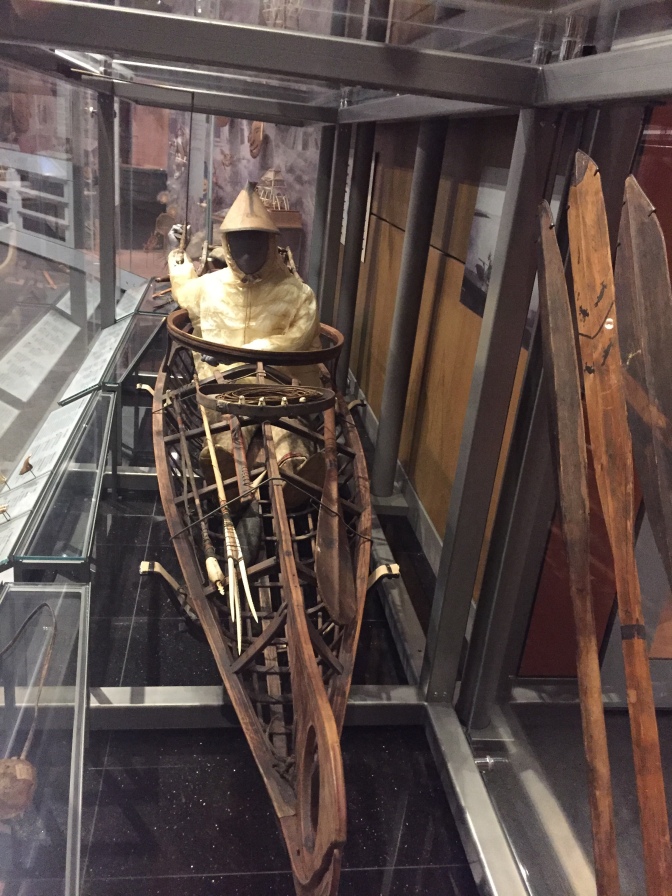 The first exhibits were about the First Nation’s People, who crossed over into Alaska from the Bering Sea Land-bridge thousands of years ago. They were already industrious, hearty people who knew how to survive in cold weather climates. The photo above shows the inner construction of a sea kayak, used for hunting…It was lined with seal skins for water protection. 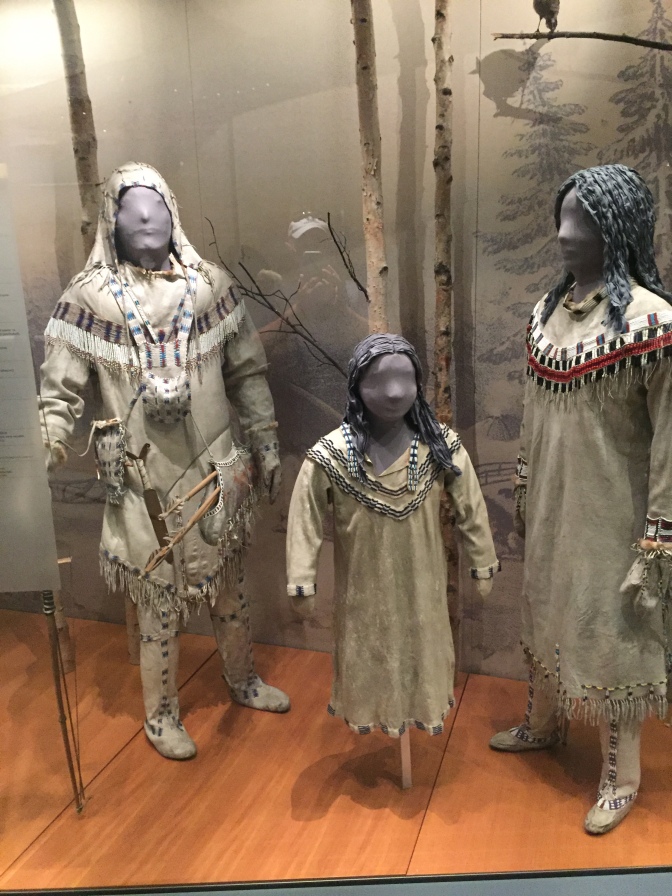 The next photo shows summer clothing. Everything seemed so brilliant for simple survival of hunter-gatherer people.  This was but the tip of the iceberg in this exhibit hall !!

Then I entered the history of colonial powers: The Russians, Americans, WWII history, Gold, Oil, etc. and quickly lost interest. Once again, everything was extremely well presented, but I was just turned off by the aggression and lack of respect. I particularly disliked the quote that the European immigrants defended their pillaging of the Alaska resources because the indigenous people were not Christian!!! 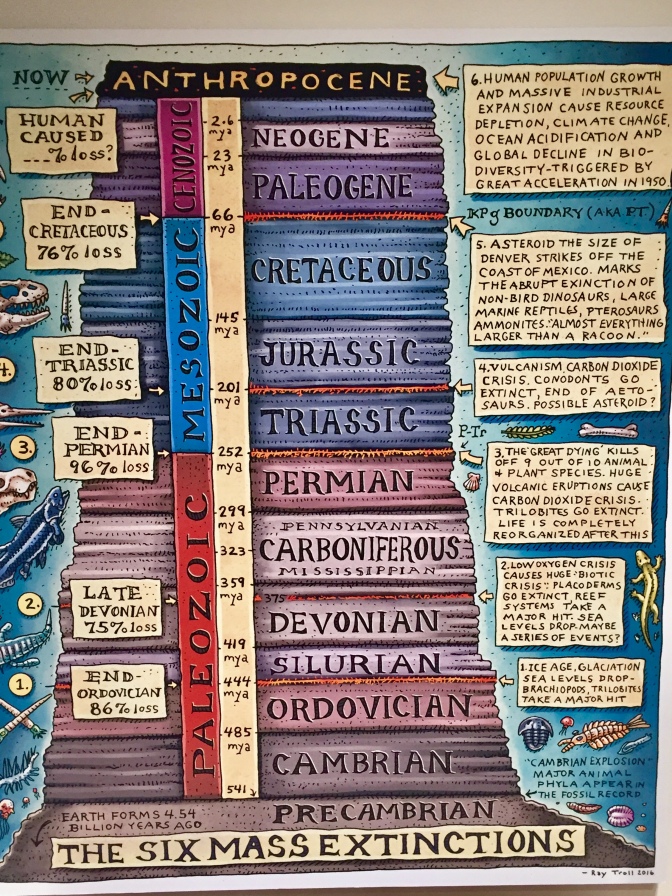 Then I entered the last exhibit halls and was reborn… They dealt with the archeological history of Alaska, the evolution and extinction of various animal species, and the time frames. I copied a couple of their diagrams that discussed six time periods of massive animal extinctions, as well as the development of various animals who evolved from land to water (example: whales) and others who transformed from water to land ( example: bears). For example, the horse was originally a sea animal that adapted to land, and migrated across the Land-bridge to America. It then went extinct. The Spanish then reintroduced the horse to America in the 1500s. Some escaped captivity and the horse became prevalent, once again, in the USA. I love the diagram below…How it recreates an archeological dig, complete with fossils found representing each Age.  I could have stayed for hours, but needed to get back to the ship to see if my restless Mrs Bear tried to be Superwoman and/or crashed herself to the floor. Thankfully, she was on the same couch waiting for my assistance to move around. 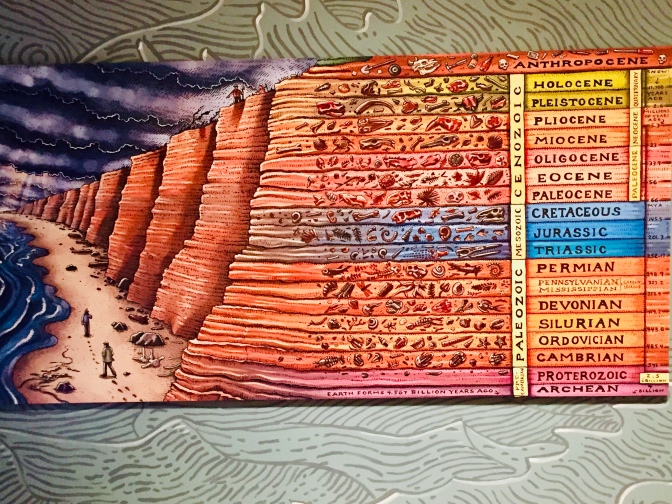