Before following up on my earlier blog about Shanghai expansion, a general reflection. Mrs Bear told me that her three weeks in China was her favorite sojourn so far… Now granted, we lucked out with private guides and stayed in a higher quality of hotels than ever before. But her statement, to me, was because of two main things. First, everywhere we went presented something that was unexpected and surprising. For example, in Shanghai, I expected a nice skyline and great museums… But wait until the next blog on their Water Gardens !!!  Totally unexpected!!!  And second, the people here are happy!!  Say what you want about politics, China’s combination of Communist government and socialist economics has created a contentment. I asked our guide about mental health issues. He told me depression and anxiety are almost nonexistent…There are no eating disorders, paranoids, or idiots who think their ticket to fame is to commit mass murder with a gun. Oh, there are no guns out there either…They protect their wildlife rather than poaching them. They are not perfect…The Chinese don’t like waiting, and have a very poor concept of personal space, and are the primary buyer of poached ivory. But they were gracious and curious. It is always fun in the rural areas when strangers ask to take photos with you. They take them back home to show their families. 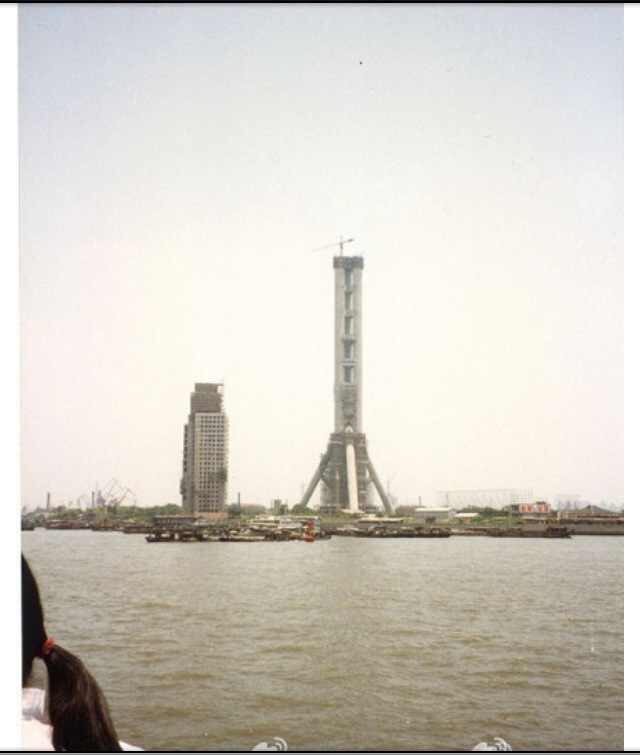 Ok a followup on the Shanghai development. Our guide airdropped me a photo from 1996 of the other side of the Bund…which means “ embankment,” in Chinese.

The above two photos were taken from our hotel window on our last early morning. What used to be rice paddies is now miles of business  space, residential high rises, green space, and a new airport with over 500 gates. Just think about the human resources needed to build all this, and I didn’t even mention the subways, roads, and rail lines to this new development. A subway ticket costs about 35 cents. Where would we ever get this kind of work force ???  And the Chinese pay with documented salaries, free healthcare, and free schools. In America, we would rely on slavery (past) or illegals (present) who get minimum money and no benefits, and constant degrading from our people and government. Ok enough political commentary… Well, one more: Chinese children go to school from 8:30 – 5:30 PM (elementary) and til 6:00 PM (secondary). There is a two hour lunch break. Most kids go home to eat. And they have homework in the evenings. There are major exams at about age 17-18…If you pass, you go to University. If not, school is over and your vocational life begins. I’ll bet no one cheats on these exams!!! I’m saying all this because China is surpassing us in training their population. Our only answer is to allow immigration to even things out. We’ll take your best, or we’ll allow emigration, both legal and illegal, of people who come here with tremendous drive and work ethics that we seem to have forgotten, in history, has been one of America’s strengths. Just my humble observations and opinions.