I was not “thrilled” about visiting Hong Kong. It was nothing personal… My personal excitement tends to lie with mountains, jungles, and rural villages. Hong Kong is one of the most densely populated cities in the world. But then some strange things happened… First, I was reminded of it’s history. In the mid 1800s, Britain was one of the First Nations to open trade routes with China. The Chinese supplied most of Britain’s tea and demanded silver in exchange. Britain attempted to counterbalance this by selling opium, grown legally at home and in India, for silver. China did not like seeing the silver leave town (or seeing their people become addicts), so they outlawed the opium trade. Britain retaliated by sending a naval fleet upriver to capture the trading port of Canton. In exchange for leaving, Britain demanded a rocky island at the mouth of the inlet, called Hong Kong. There was nothing there , but its location was incredibly strategic. Later years brought a short second war and a treaty that ceded about 90 outlying islands to the British on a 99 year lease. Kowloon Peninsula, just across the main channel, and Hong Kong island became the primary city-state.

Over the years, the population swelled and there was nowhere to build but up. Today, Hong Kong has the largest concentration of high rise buildings anywhere in the world.

We took the funicular to the top of the mountain behind the city for perspective. Our guide says that there are major construction projects going on.  These are either built on land fill, like their ultramodern airport, or by demolishing the mountains to build more high rises on flat lands. The rock is used to replace the dredged sand taken for landfill.

What also made Hong Kong so interesting and fun were the extremes. 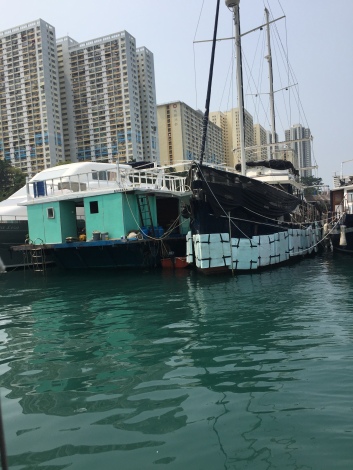 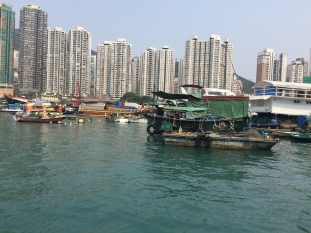 We took a cruise on a local sampan through the floating city. These delapadated homes are slowly disappearing as the younger generation doesn’t want to live so primitively. The photos above show this community totally surrounded by high rises.

This is a city that, despite being ceded back to China, maintains a two ruler set of rules, at least for the near future. They have their own currency, laws, and local officials. They feel far ahead of mainland China when it comes to economy, pollution, and quality of life. 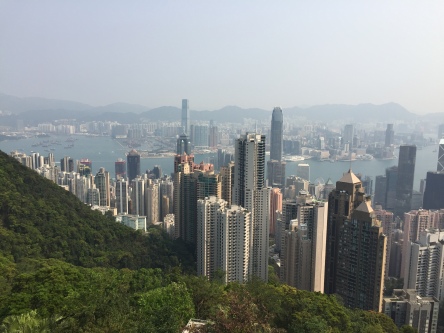 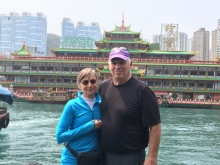 This city is very class conscious. Everyone knows who the rich people are because they live high on the hills. The higher you live, the more expensive the condos. Also, this is a very tough place to drive. The roads are winding, or narrow, slow expressways. And there is no place to park. But the ultra rich can be seen in their Porsches, Mercedes, and sometimes more ritzy. I saw a Lotus dealer, next to Ferrari. And they solve their parking dilemma by hiring personal drivers. Compare all this to a regular, more working class people who have extensive wet and dry markets for their food. Most locals can do without pork, chicken, or beef, but heaven help them if they can’t get their seafood. AND they eat everything…Intestines, liver, heads, you get the picture. Once again, compare this to a city that has the reputation for the best food in the world.

So we had fun with the extremes of Hong Kong. Like it or not, it is well worth visiting, and will not soon be forgotten. 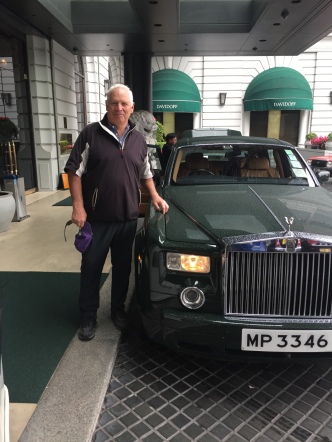