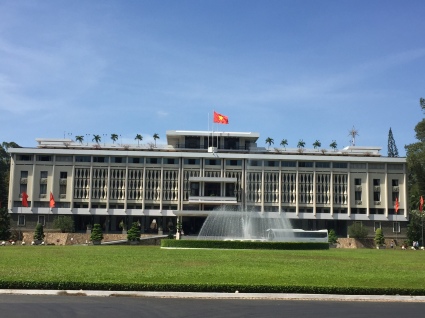 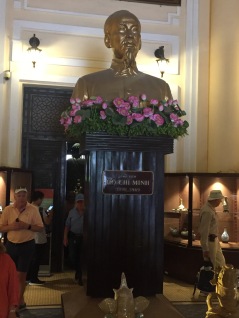 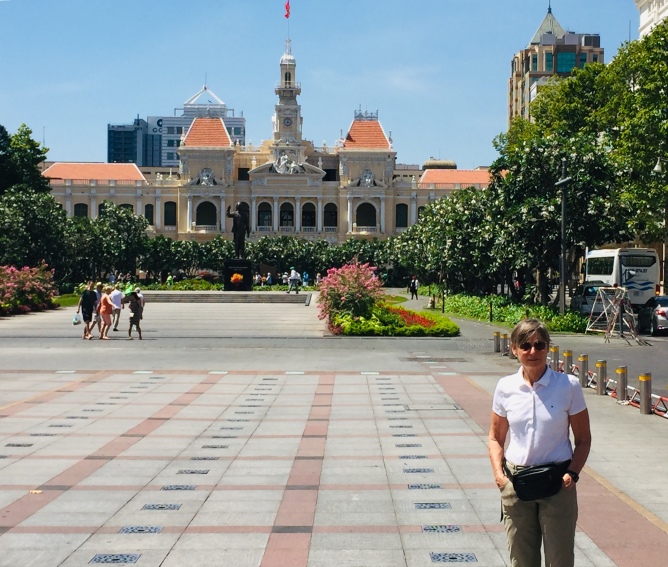 First, some general thoughts and observations about Vietnam: Mrs Bear and I were in college during the central years of the War in Vietnam. So the conflict was never far from our minds when we scheduled this trip. But the “American War,” as the Vietnamese call it, was not the primary focus of our hosts. In fact roughly 70% of the population was born after the conflict ended. They see it as their grandparent’s and parent’s war. While there were many references to the War, the focus was more on present-day Vietnam and its development. And regarding this development, I was generally impressed. Vietnam’s roads were in great shape. The economy keeps growing. The country is literate. And the people are employed. While there were some poor sections of the city, most shops were indoors with AC. I have learned to use this factor ( whether shops and stores sell their goods inside in stores, or outside in roadside stands) as an indicator of an area’s general level of development.

As we spent more time with our Vietnamese guides, I was reminded of a scene in the movie, BEACHES… Bette Midler’s character, C. C. Bloom, has been summoned back to New York to take on a lead role in a Broadway musical that her ex-husband is producing. They sit and talk for a while about their divorce, and then her Ex asks C. C. If she’ll do the role. She replies, “Sure, business is business.” This is the point we have reached with Vietnam: Business is business. Our countries trade and cooperate. Our guide mentioned that 1.5 million travelers from the USA visit Vietnam annually… And the Vietnamese are now able to travel to America and Europe. He also stated that 300,000 people of the 1.5 million were Vietnamese expats coming home to visit family. I think it is great that these distances have been bridged. And business is business… There will be direct flights to Ho Chi Minh City from our west coast in a year or so. Mrs Bear also commented on another bridge built between Vietnam’s past and present…The photos illustrate two examples of the beautiful French buildings which have been renovated and showcased. The government could have torn them down and built something modern. 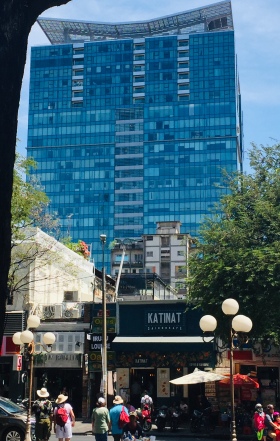 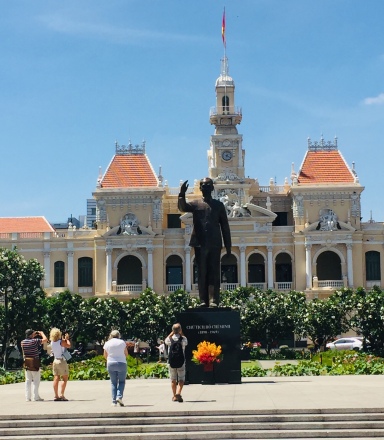 Having said all this, associations to the War were never far away. If you enlarge and focus in on the photo above (left), you will see clearly the old CIA building which, at the end of the war, acted as a helicopter landing pad on the roof for the last evacuations from Saigon. The statue on the right was one of about four we saw of Ho Chi Minh. 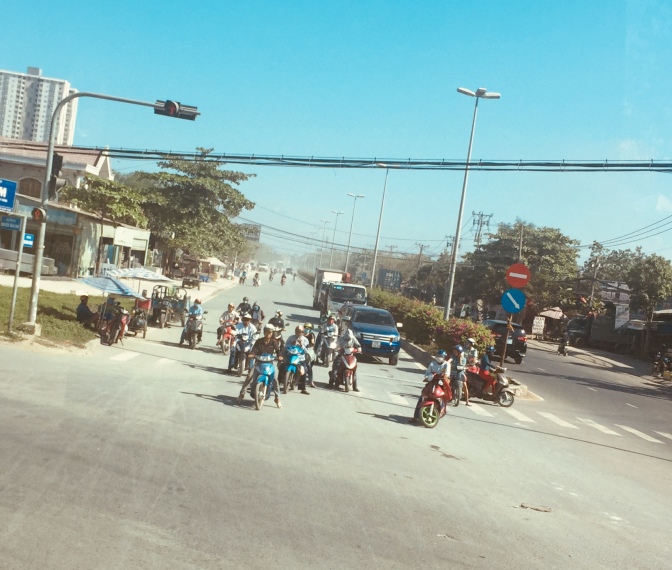 A couple observations about Ho Chi Minh City (AKA HCMC):  The photo above was a typical wait at a light. I count approximately 12 motor scooters, one private auto, and two commercial vehicles. This is typical number. HCMC has about 9 million people and 8 million scooters. There is a 100% tax on cars, which doubles their price. A Toyota Camry costs 70K. I found myself thinking how nice NYC would be with 8 million scooters, cabs, delivery vehicles, and buses only !!!

The other interesting thing about local transportation was that driving was done with, what I will call, Mild Aggression. Major intersection sometimes had lights, which means that sometimes they didn’t. So imagine being at a busy, four-way, intersection when everyone is traveling at about 25 mph… and the flow is against you. You keep creeping forward until gaining just enough street to demand that cars and trucks give you the right of way. But it takes more creeping forward to get the scooters to yield instead of weaving  around you. But finally you achieve the territorial advantage and your direction takes over. We played this pseudo chicken game with a full size bus. There is no honking as everyone understands the unwritten rules of this road. I found it to be very impressive. 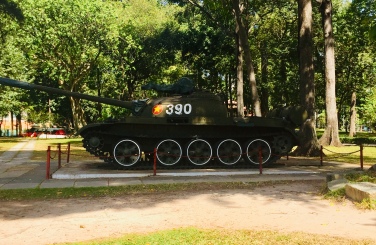 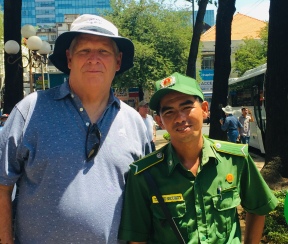 On the way out of the city, I asked our guide what it has been like to be at peace for the past 45 years. He replied that it has been wonderful. A study of Vietnam’s history reveals a country that has been fighting off invaders since the Monguls  of Kubli Khan. After unifying the country in the 1970s, the South was sealed off to the outside world for ten years… for re-education and instillation of the new government. But then, Vietnam reinvented itself on the world stage. Our guide says the people are ok with communist rule as long as their leader loves the country more than loving himself. Mrs Bear has repeatedly made comments that sometimes, “benevolent dictatorships,” work well in certain parts of the world. I found myself thinking that it turned out ok that we lost this war (other than the sacrifice of so many lives from my generation). The people here have figured out a system that is working for them.

Next we visit the Mekong River Delta

One thought on “Hi Chi Minh City (AKA Saigon)”