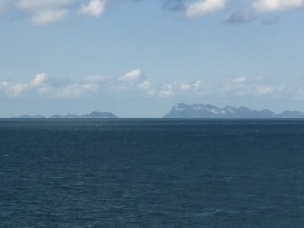 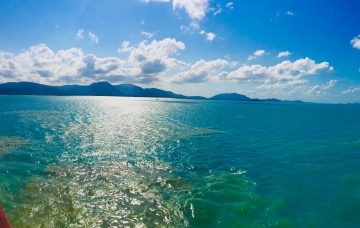 We left Chiang Mai by flying south to Bangkok and then driving southeast to the Gulf of Thailand. There, we boarded our ship to cruise southeast to Koh Samui, an island surrounded by 60 smaller islands. It is a very popular beach resort, trailing only Phuket in popularity. The above photos are the surrounding islands in the Gulf.

While the island has been inhabited for a thousand years, Koh Samui was largely undeveloped until the 1970s. There was no paved road, and it took all day to make it from one side of the island to the other. One ship came out to the island each week from the mainland…But the people were largely self sufficient… They fished and grew their own fruits and vegetables.

The first visitors were students and backpackers who were drawn to the beaches and reefs. They stayed with the locals. Little-by-little, the island embraced tourism. Additional boat transports  were added and commercial hotel chains built properties. Seaside center villas and condos blended in to the available space. And the locals built attractions to cater to tourism. 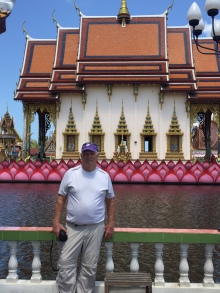 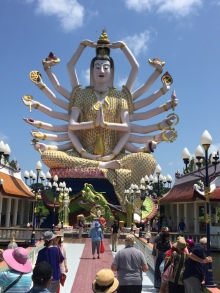 These temples were built in the 1970s primarily as a tourism draw. The Big Buddha shrine on the left had a sign that, for a donation of Baht, a monk would spray you with holy water. The same thing probably happens in Chiang Mai, but it would be a spiritual honor and not advertised.

So the result is a very beautiful island totally developed along its edges with a higher elevation, dense rain forest rising above at its center. The economy is good…I saw mini golf and pet grooming shops. There was even a restaurant called “The Saloon,” with wagon wheel decor.

While I’m being a touch sarcastic, the Chinese and Russians escape their winters to come here. And it is beautiful:

So, on this note, we bid farewell to Thailand and set cruise for Cambodia.