Each of the past few years, I have accompanied my younger daughter on an adult Disney World trip. I wrote a blog entry on Dani’s consult last year as “Disney Veterinarian.” This year, she was not on call so we spent four days basking in the glow of “The Happiest Place on Earth.” Or so we thought.

Our adventures took a dark turn almost immediately. While trying to navigate the ever-present throng of magic seekers, I walked in front of one of the ever-present adult scooter throng. Despite my attempt to avoid him at the last second by literally hurling my body out of the way, my leap was a little short. Then while lying on the ground, I was accosted by his cane !!!!

The alleged reason for the assault: Aging Gomer’s life-long dream was to ride to Neverland on Peter Pan, and I somehow blocked his path !!!!

Luckily. I retained a bit of my young man’s agility and evaded the blow. However, my enjoyment of the Disney aura only lasted a couple hours. While walking through Adventure Land, a “cast member” felt I needed a little more adventure. This was accomplished by insisting that I pet his Enguro, a cousin of Sammy the Christmas Snake, who only bites the ones he loves. And he definitely LOVED me !!!

By the next morning, the swelling was almost gone…And I had enough finger dexterity to reach into my wallet anytime we needed to buy meals or drinks.

The next morning, we arose early to have the privilege of waiting in a 60+ minute line for the Avatar simulator (which is hands-down the best attraction Disney has ever designed). And somehow the people ahead of us thought I was cutting the line. At least they didn’t have canes !!!! Despite my innocence, the Animal Kingdom cast members thought I looked nervous, as in hiding the truth. They wouldn’t believe my story that it was PTSD from the cane attack !!!

I avoided further problems and misunderstandings for the rest of the day. But Hollywood Studios provided its own darkness the following day. I was minding my own business when someone yells out to passing Storm Troopers that I was a spy against the Empire. When I couldn’t provide the right paper identification for a galaxy far, far away, I was detained and missed most of the rides. I was finally able to attend the stage show for the Lion King… But while exiting, my daughter claims I did a no-no by stepping down the rows (rather than walking to the designated steps). I vehemently claimed to have been pushed !!!! Probably by my earlier interrogators !!!! The result was the same:

These incidents, whether accidental, misunderstood, or conspiratorial, finally did me in. I had to use Gomer transportation on our final day !!! 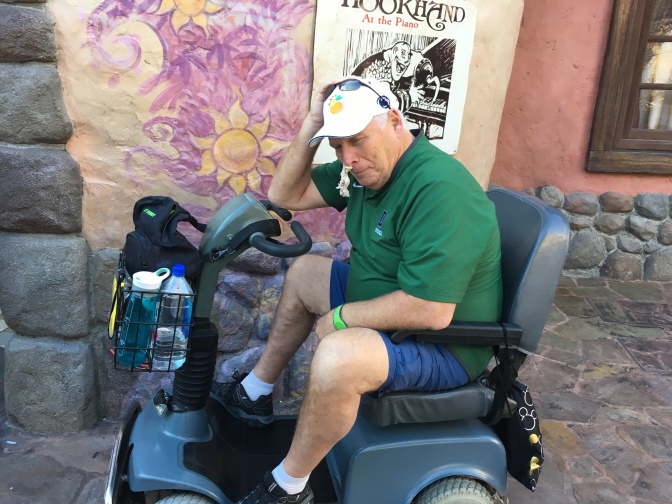 Needless to say, this was not the magical trip I had expected… But I discovered that a disability or injury, whether real or imagined, gets you to the front of lines without angering the masses !!!! Maybe next time, I’ll come with s scooter, a cane, forged Empire identity papers, and a doctor’s note. That sounds a lot brighter !!!!