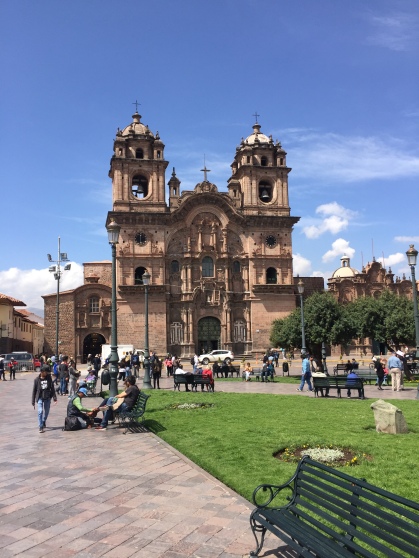 Cuzco is located in the Andes at an elevation of over 11,000 feet above sea level. It was the capitol of the Incan Empire and its name actually meant “navel,” given its importance to  the Empire. Cuzco was the sight of serious battles between the Spanish invaders and the Inca armies. The Spanish prevailed, primarily due to the spread of smallpox…And the first thing they did was to destroy the Incan temples…They then built churches on the sites of those temples, after ransacking the gold. As I was listening to this history lecture, I found myself wondering whether the Spanish did this for the gold or to spread what they believed to be a superior religion… For me, I think it was the gold, but done in the name of religion.

But the resulting flow of empires and influences here turned out unpredictably…Step one: The Spanish win, destroy the Incan temples, and begin to build their own churches to intimidate the survivors, many whom became slaves, to adopt Christianity. Step two: A huge earthquake shakes Cusco every three hundred years. In 1650 a quake destroys some of the “Colonial” buildings and exposes the remains of the Incan masterpieces. The political climate is now different, and the residents and rulers were much more interested in their heritage. They began to uncover Incan remains. Step three: Peru achieves its independence from Spain, and while still a Catholic nation, relearns to cherish its Incan bloodlines. For example, in the local Cathedral, which took 100 years to complete, hangs a Fresco Of The Last Supper, painted by a Peruvian artist. But, the foods in the painting are local vegetables and breads. And, the face painted for Judas is none other than that of Francisco Pizzaro, the Spanish Conquistador who defeated the Incas. The Cathedral also has an incredible set of wood carvings called “The Choir.” On each chair is a carved Incan woman and they are all naked and pregnant…These represent the Incan goddess Parchamama or “Mother Earth.” The pregnancies are a symbol of fertility.

So a visit to today’s Cusco provides a glimpse of both the wonderful Incan architecture as well as their Colonial churches and buildings. And sometimes, they are side-by-side. The top photo on the left is the uncovered Incan Temple Of The Sun, which is surrounded by the Spanish arches and frescos on the walls. The church above is adjacent to the Cathedral on the same square, La Compañía, damaged by the 1650 earthquake and finished in 1660.

The other photos are illustrations of how the Inca joined their stone blocks. They show indentations in the rock that were filled with liquid bronze which molded the stones together.

And finally,  a pic from the remains of another Incan Temple, Sacsayhuaman, of the beautiful stone work…Our guide told us that that Incan stonework in Cusco is the best because it was the capitol.

Here is an illustration of what they think Sacsayhuaman looked like. The Spanish destroyed the Temples, ordered the foundations buried, and began to pilfer the stones to build their churches below in the town center. They built a ramp, which is still visible, and pushed the stones down to waiting slaves. There were many fatalities in this process, and the road that stands on this spot is now called “The Angry Road.” 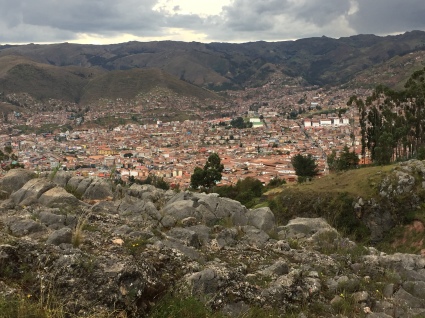 A couple more pics to end…One is the city from the surrounding foothills, which sounds crazy to say when these “hills,” are near 12000 feet. The other pic, once again, shows the genius of the Inca. Look closely and you will see alternating stones that were cut to wrap around the corner. When the earthquakes hit, the Inca stones move with the tremors while the Colonial buildings quake and the Bishops pray the churches will remain standing.