Route 66 is the highway that wouldn’t die…Most of us old farts can’t remember any of the highway numbers that were replaced by the Interstate Highway System. But after this highway’s signs were taken down, they mysteriously began to reappear. I believe that there were a couple reasons for this resurrection: First, a portion of the route became the primary migration route for families leaving the Dust Bowl areas of Oklahoma and Texas for the “Promised Land” Of California. It was a massive movement of penniless men looking for work in the agricultural fields of the Central Valley. I was too young to have experienced this, but I vividly recall reading Steinbeck’s “ The Grapes of Wrath,” in high school. Later, I became a student of American folk music and traced its roots back to the dust bowl ballads of Woody Guthrie…His songs are perhaps the best descriptors of the western migration, their unpopularity in California, and the establishment of the first labor unions.

The second reason was the aura the “Mother Road” received after WW2…The route expanded to reach from Chicago to the Santa Monica Pier. And there was a popular TV show in the 1950s about two guys’ adventures while driving the road in their Corvette. This recreation was ions away from the destitution of the Dust Bowl, and paired the fantasy of driving the American Highway with Route 66. This is still true today as many vacationers spend their days driving as much of the original route as possible.

I got off the Interstate for a couple specific parts of the Mother Road: The first was Winslow, Arizona, which was also made famous by Jackson Browne’s lyrics to “Take It Easy.”    I’m standing on a corner in Winslow, Arizona…I’m such a fine sight to see

It’s a girl, my Lord, in a flatbed Ford slowing down to take a look at me…Come on baby, don’t say maybe…I’ve got to know if your sweet love is going to save me…We may  lose or we may win…But we will never be here again…So open up I’m climbing in…Take it easy. 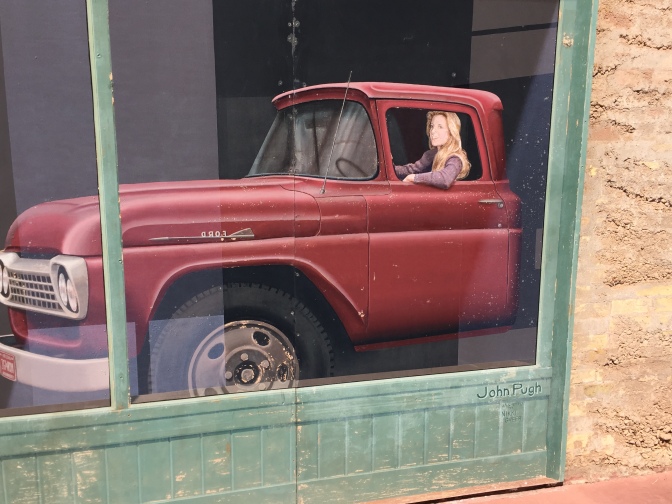 The statue on the corner is Glenn Frey singing the song.

My second stop on Route 66 was almost a pilgrimage…Just outside Amarillo, Texas, the artistic group, Ant Farm planted ten Cadillacs in the ground along Route 66 in 1974. It has become a “must see” of Route 66 ever since… 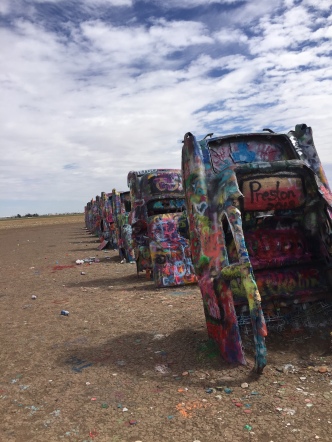 One more little side note…Along my drive in New Mexico, I saw an exit sign for Milagro…I had always thought this town was fictional. I got off the road and saw that the directions led the driver on an off road adventure that quickly disappeared into the desert…Exactly what I would have expected if the town in Robert Redford’s movie truely exists. Now I’ll have to do some research.