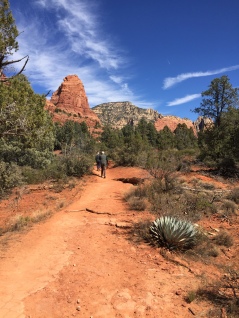 Driving west out of Albuquerque, the terrain is a constant 6000 feet across high prairie desert. The elevation rises gradually at the continent divide, then recedes back to 6000. Once again, the road is dotted by casinos on Indian land. There are so many…I have no idea where their customers come from.

Eventually, the road leads to Flagstaff, Arizona, and the elevation reaches over 7000 feet with a majestic mountain peak hovering over the city. This is the gateway to the Grand Canyon. I got off briefly at an exit on the edge of town. The signs said it was 65 miles to either the south or north rim. FYI: the South Rim is roughly 6000 feet above sea level and open all year…The North Rim is over 8000 feet, and closes for the winter.

On to the primary topic of this post…From Flagstaff, I turned south on the Interstate that heads to Phoenix, but got off after about 50 miles, heading to Sedona. Sedona is at roughly 3500 feet, and the drive in can be either spectacularly winding or less dramatic downhill on the highway before turning back into the canyons. The draw of Sedona is the set of beautiful red rock formations…See the pics above and below, taken from a hike with my brother and his wife.

From what I was told and read, approximately 350 million years ago, this area was a coastal plain, and mud collected over the next 50 million years. As the coastline receded, the mud turned to rock and sand, and gained a reddish color from an infusion of iron. At one time, this red rock was a solid 1900 feet high. Then rivers and creeks went to work on the rock and the erosion process left the rock formations you see today. This seems strange because this area, like most of Arizona, is so arid.

I think Disney used Sedona as its model for the Rolling Thunder Coaster ride in Orlando.

Sedona is now very built up with an influx of four million tourist visits per year. It is a mess to drive around town, and we had to park a half-mile from the trailhead…But once on the trails, people branch out and there is finally a sense of majesty. 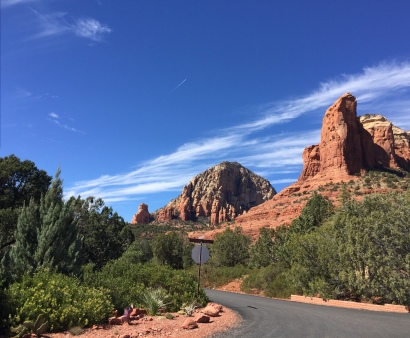